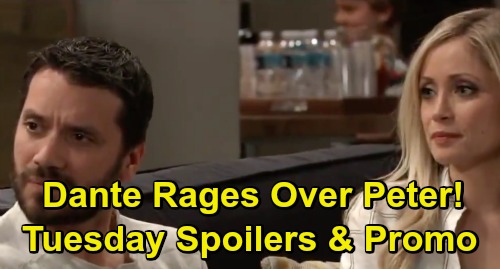 General Hospital (GH) spoilers for Tuesday, March 26, tease that Harrison Chase (Josh Swickard) will have a lot to process. He just heard Willow Tait’s (Katelyn MacMullen) terrible tale, so he’ll turn to Dr. Hamilton Finn (Michael Easton) for support. Chase has promised not to give away any details, but he can still allude to the problems he has to tackle.

After opening up, Chase will wonder if Finn has any idea what it feels like. Whether Chase is talking about Willow’s situation or the one he now finds himself in, Finn can’t completely put himself in their shoes. He can only be there for his brother and offer guidance.

Over with Jordan Ashford (Briana Nicole Henry), she’ll pick up the phone and look confused by what she hears on the other end. Jordan will wonder if this person has a crime to report. Since Alexis Davis (Nancy Lee Grahn) just called the commissioner, she’ll probably be the one with something to spill.

However, Alexis should change her mind at the last second. She dialed Jordan because she knows how Sonny Corinthos (Maurice Benard) tends to handle things, but he may push her to hang up and hear him out. General Hospital spoilers say Alexis will want the truth. She’ll hope to find out exactly what Sonny and Jason Morgan (Steve Burton) have planned, but she may not get the specifics.

Sonny will just make it clear that he’ll do whatever it takes to protect Kristina Corinthos-Davis (Lexi Ainsworth). He may encourage Alexis to look the other way if this ultimately get messy. Their daughter’s future depends on it!

Across town, Jason will still have Shiloh Archer (Coby Ryan McLaughlin) in a chokehold. He’ll nearly strangle this cult leader, but Sam McCall (Kelly Monaco) will eventually intervene. She’ll have to choose a side, so it appears she’ll take Shiloh’s. That’s the only way to keep building Shiloh’s trust and avoid blowing the scheme.

GH spoilers say Jason will be arrested before long, so that’ll be another complication to deal with. In the meantime, Anna Devane (Finola Hughes) will reach out to Peter August (Wes Ramsey). She’ll be hurt when he pushes her away, so she’ll burst into tears. Anna will insist that she’s trying to pursue a relationship with Peter because she’s his mother.

At some point on Tuesday, a letter will arrive for Anna. Will it be from Alex Devane Marick (Finola Hughes) or connect to her in some way? Regardless, Anna may get another hint that leads her to question if Robin Scorpio-Drake (Kimberley McCullough) is really her daughter. Of course, she’ll undoubtedly be mistaken about that. It’s Peter who most likely belongs to Alex, but that revelation should come later.

Other General Hospital spoilers say Dante Falconeri (Dominic Zamprogna) will get some disturbing news. He’ll catch up with Maxie Jones (Kirsten Storms) and learn that Peter’s been spending time with Nathan West’s (Ryan Paevey) son. Naturally, Dante will object to that. His anger over the situation could sink him back into a dark place again.

GH fans can expect a surprise homecoming party for Dante soon. It’ll lead to a major outburst, so stay tuned for some serious drama. We’ll give you updates as other info comes in. Stick with the ABC soap and don’t forget to check CDL often for the latest General Hospital spoilers, updates and news.