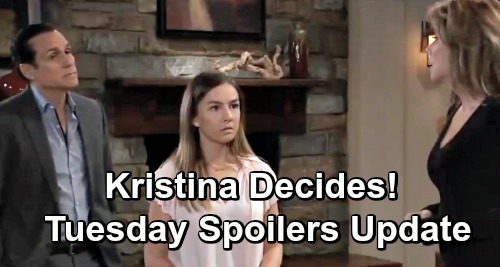 General Hospital (GH) spoilers update for Tuesday, May 7, tease that Jasper “Jax” Jacks (Ingo Rademacher) will finally arrive back in Port Charles. He’ll be in town to support Josslyn Jacks (Eden McCoy), who’s clearly struggling after Oscar Nero’s (Garren Stitt) death. Carly Corinthos (Laura Wright) will be thrilled to see Jax again, even if the circumstances aren’t ideal. She’ll wonder if Jax is staying in Port Charles for a while.

That may not be the plan right now, but Jax will find a reason to extend his stay soon. In fact, Jax will be sticking around indefinitely! In the meantime, Harrison Chase (Josh Swickard) will find Kristina Corinthos-Davis (Lexi Ainsworth). He’ll be prepared to grant Kristina her freedom, but she may not want it. It seems like Willow Tait’s (Katelyn MacMullen) cautionary tale is sinking in.

Dr. Neil Byrne (Joe Flanigan) pointed out that they’d come to a crossroads here. It’s the crucial point in Kristina’s treatment where she has to decide for herself what she wants. Neil offered an open door to Kristina, but it looks like she’ll choose her family over Shiloh Archer (Coby Ryan McLaughlin). That probably means she’ll lie and claim she came to the safe house because she wanted to.

Elsewhere, Shiloh will get Sam McCall’s (Kelly Monaco) trust offering. She’ll deliver the fake pledge she cooked up with Jason Morgan (Steve Burton) and hope this plot works. Over with Peter August (Wes Ramsey), he’ll invite Maxie Jones (Kirsten Storms) on a private jet and keep their destination a secret at first. Maxie will point out that she had some trouble packing as a result!

Once their journey begins, Peter will admit their first date’s going to be in Paris. He’ll hope to blow Maxie away, but she’ll insist that’s not necessary. Peter will fear that he’s gone overboard, but Maxie will offer reassurance. She’ll simply indicate that hanging out with Peter is enough. He doesn’t have to do anything fancy to impress her, but Maxie will still think it’s sweet that Peter’s going all-out.

Other General Hospital spoilers say Nina Reeves (Michelle Stafford) will witness something troubling. She’ll spy Willow getting too close to Michael Corinthos (Chad Duell) – at least in Nina’s opinion. As a result, Nina will fight for Sasha Gilmore’s (Sofia Mattsson) chance at romance. She’ll basically accuse Willow of hitting on Michael, so this school teacher will fire back with a lecture.

Dr. Hamilton Finn (Michael Easton) won’t want Anna to fret until she knows for sure, but that can’t stop her concerns. Now that her suspicions are running wild, Anna’s mind will be filled with horrible outcomes. She’ll hate the idea of Peter spiraling over a shocking revelation like this.