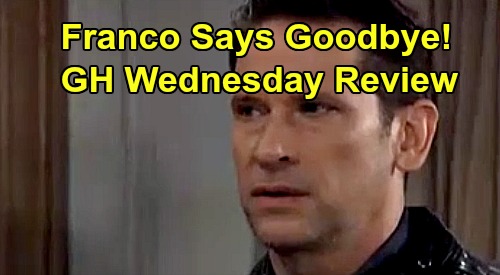 General Hospital (GH) spoilers review for Tuesday, November 5, reveal that Brad Cooper (Parry Shen) went to see Julian Jerome (William deVry) to ask him one last time not to make him leave Lucas Jones (Ryan Carnes). Julian flatly refused, and so Brad went straight to Lucas and told him that Julian had sent the flowers and paid an actor to send the nude pictures to his phone. Lucas found this hard to believe, so Brad played him a recording of his earlier conversation with Julian, which confirmed it.

Of course, then Lucas demanded to know why his father would do something like this, and Brad claimed it was because Julian found out about the lab tampering that he did for Liesl Obrecht (Kathleen Gati). Lucas then pressed about why Brad would do anything for Obrecht, and Brad claimed that she offered to get him anti-anxiety medication without a prescription. Lucas was horrified by the turn of events and wouldn’t let Brad touch him.

Clearly, Lucas’ world is falling apart. Now he’s in the position of having both his husband and his father go back to their old ways. But to Lucas’ credit, he still seems to be able to tell that there is more to this story than he’s been told. At the end of Tuesday’s episode, he wasn’t any nearer to believing in Brad than he was at the start.

Meanwhile, Nikolas Cassadine (Marcus Coloma) and Jasper “Jax” Jacks (Ingo Rademacher) argued about Nikolas’ decision to come to Port Charles. Jax wasn’t happy with Nikolas staying at his home and worried about him being detected. But Nikolas argued that he was back to take what was stolen from him and to burn Valentin Cassadine’s (James Patrick Stuart) life to ashes.

Nikolas was also adamant that Laura Collins (Genie Francis) should not know about his existence yet, since it could compromise the search for the portrait of Helena Cassadine (Constance Towers). Later, when alone, Nikolas was doing online research on his mother and on Ava Jerome’s (Maura West) gallery when the doorbell rang. Nikolas went to the door and looked through the peephole to see Laura standing there.

Finally, Elizabeth Baldwin (Rebecca Herbst) and Cameron Webber (William Lipton) were surprised when Franco Baldwin (Roger Howarth) appeared at their door. Franco had come to say goodbye and that he was leaving Port Charles with Kim Nero (Tamara Braun) tomorrow. He and Kim had met earlier and agreed to leave so that Kim could get psychological help out of town. Cameron ended up storming out, leaving Franco and Elizabeth to talk.

There wasn’t much to say at that point, but Franco did apologize to Elizabeth and tell her that neither she nor her family deserve this. Elizabeth remarked that “Franco” doesn’t deserve it, either. As he was walking out, Elizabeth told him to wait, then kissed him and looked in his eyes and told him that he needed to fight and come back like he promised.

Clearly something is going to keep Franco in Port Charles, while it appears that Kim will ultimately leave town alone, since Tamara Braun is exiting the show. But what exactly will end up driving Franco and Kim apart remains to be seen. Scott Baldwin (Kin Shriner) remarked at the end of Tuesday’s GH episode that he had a new idea for keeping Franco around, which should play out on the episode airing on Wednesday, November 6th.