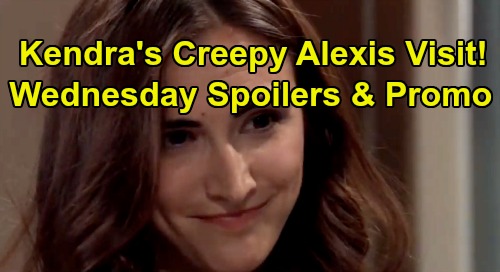 General Hospital (GH) spoilers for Wednesday, November 6, tease that Hayden Barnes (Rebecca Budig) will reassure Hamilton Finn (Michael Easton). She’ll insist they’re going to work all this out. Finn was thrown for a loop when his daughter suddenly entered his life, but he’s ready to be a dad.

Unfortunately, Finn won’t know how Anna Devane’s (Finola Hughes) going to handle this news. He’ll definitely worry about the road ahead, but Hayden will think they can sort through it. Over with “Drew Cain” aka Franco Baldwin (Roger Howath), he’ll tell Scott Baldwin (Kin Shriner) he’s leaving town with Kim Nero (Tamara Braun). “Drew” wasn’t sure if this was the right call, but Kim was adamant that there’s nothing left for her in Port Charles.

However, Scott will make a last-ditch effort to change “Drew’s” mind. He alluded to Franco doing some good before he did bad – and added that not everyone knows about that. It sounds like Scott will finally bring up all the Jim Harvey (Greg Evigan) drama. Scott may point out that Franco saved Drew from facing Jim’s abuse when they were young boys.

That could make Franco rethink his big move. He could start to believe he owes Franco – at least that’s probably what Scott’s hoping. Meanwhile, Kim will hope to hash things out with Elizabeth Baldwin (Rebecca Herbst). She’ll insist they’re long overdue for this, but there’s really nothing Kim can say that would help. Liz has lost her husband any way you slice it, but things should turn around for her eventually.

In the meantime, General Hospital spoilers say Alexis Davis’ (Nancy Lee Grahn) health will rapidly deteriorate. She’ll get a visit from Kendra Lennon (Michelle Argyris) before the worst of it. Kendra will pretend she’s sorry for Alexis’ ordeal and may act like she pushed her client too hard. An unsuspecting Alexis will assure Kendra that she she’s certainly not to blame for her stint at GH.

Alexis is obviously wrong about that! Her tainted supplement is the reason for her medical woes, which are about to take terrible turn. At Jasper “Jax” Jacks’ (Ingo Rademacher) place, he’ll return in the nick of time. Jax will manage to stop Laura Webber (Genie Francis) from barging in and discovering Nikolas Cassadine (Nicholas Bechtel) – at least for now.

Next, Robert Scorpio (Tristan Rogers) will tell Cassandra Pierce (Jessica Tuck) this the only deal she’s going to get. Cassandra will try to play hardball, but that plan may not work out well for her. Nevertheless, Cassandra is a resourceful gal – and that should lead to more drama for Sam McCall (Kelly Monaco).

Speaking of Sam, she’ll tell Jason Morgan (Steve Burton) that she doesn’t want any trouble. Sam’s had enough already! General Hospital spoilers say Sam won’t want to get in Cassandra’s way, but she’ll get caught up in her cellmate’s chaos soon enough. We’ll give you updates as other GH details emerge. Stay tuned to the ABC soap and don’t forget to check CDL often for the latest General Hospital spoilers, updates and news.