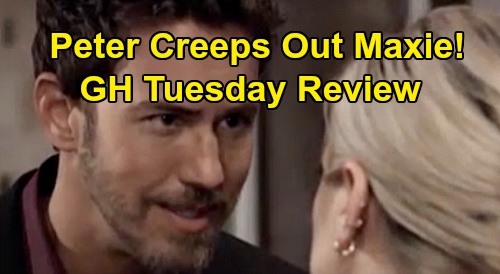 General Hospital (GH) spoilers review for Tuesday, October 29, reveal that Franco Baldwin (Roger Howarth) got the third degree from Kim Nero (Tamara Braun) after he indicated that he wanted to stay in Port Charles for the time being. Kim argued that the two of them needed to just leave and get out of there, and she quickly deduced that Franco was disturbed about her drugging of Drew Cain (Billy Miller). Franco explained that he loved her and still wanted to be with her, but he now realized everything that she had gone through.

Kim got emotional and upset as Franco stated that he wanted to take things slowly and give her time to heal. That made her particularly angry with Julian Jerome (William deVry) for telling Scott Baldwin (Kin Shriner) about the drugging incident, and she took off to confront Julian. She wound up at Charlie’s Pub and slapped Julian before giving him a piece of her mind. So, even though Kim and Franco ended up winning the case, they didn’t exactly get their happy ending.

Meanwhile, at the gym, Scott told Sonny Corinthos (Maurice Benard) that he wanted justice. Sonny hemmed and hawed, stating that capturing Franco and holding him against his will for a memory procedure was a major felony. Ultimately, Sonny didn’t say either yes or no, but Scott basically took it as a no and stormed off. Later, Franco showed up at the gym looking to hit the bag. He and Sonny talked a bit and Sonny revealed that while he was friends with Drew, he wasn’t fond of Franco.

Sonny also told Franco that Scott had been in earlier and asked for his help, which Franco found interesting. But mostly, Franco just wanted to hit something, so Sonny spotted him while he punched away. Sonny looked pretty conflicted about the whole thing, especially since just earlier he saw Cameron Webber (William Lipton) hitting the bag and breaking down. Sonny now knows how important Franco is to the people he loves, but he also respects the “Drew” that Franco has become. It will be interesting to see how Sonny decides to proceed from here.

Meanwhile, Maxie West (Kirsten Storms) and Peter August (Wes Ramsey) awaited news about the verdict in Franco’s competency hearing. Maxie was suspicious and said that it seemed that the verdict meant more to him than he was letting on, even though Peter said that he was just interested from a publishing standpoint.

After a bit, Peter got word of the verdict, and assuming that it meant that he was now free and clear, he decided that he wanted to go forward with finding a place to live with Maxie and her son. Maxie was weirded out by this, since Peter had recently hit the brakes on finding a place to live. She wondered what caused his sudden turnaround, and he went on about how he had been superstitious before, but that he was over it now. Maxie remained puzzled by his about-face.

Of course, if Franco decides for some reason to go forward with the memory reversal procedure, Peter will be back to square one. He may think that he’s in the clear now, but he doesn’t realize that he’s got Jason Morgan (Steve Burton) and Damian Spinelli (Bradford Anderson) looking into his connection to Shiloh, so he shouldn’t rest too easily just yet.