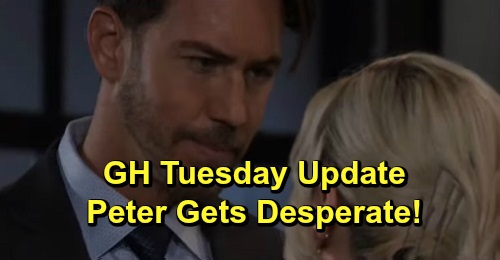 General Hospital (GH) spoilers update for Tuesday, September 24, teases that Shiloh Archer (Coby Ryan McLaughlin) will worry about his predicament. He’s got the upper hand, but he’s also got too many hostages. Shiloh just wanted to get some supplies and head out with “Wiley Cooper-Jones,” but Dev Cerci (Ashton Arbab) and Sam McCall (Kelly Monaco).

Now they’re stuck with Shiloh on The Haunted Star, so the fugitive will have to figure out his next move. Sam and Dev will fear for their lives as Shiloh grows agitated. He’ll be awfully tense, which should bring even more peril. Over with Jason Morgan (Steve Burton), he’ll do his best to get in touch with Sam. Jason probably won’t succeed, but he’ll still manage to ride to the rescue eventually. He always does!

Other General Hospital spoilers say Harrison Chase (Josh Swickard) will drop a bomb on Willow Tait (Katelyn MacMullen). He’ll admit Shiloh abducted “Wiley,” so Willow will be a nervous wreck. GH fans know Willow’s done everything in her power to keep Shiloh and “Wiley” apart. She’ll fear Shiloh might make it over the border and disappear with their “son” – who isn’t really their son at all.

Of course, only a few people are in the loop on the baby swap. Brad Cooper (Parry Shen) is obviously one of them, so he’ll definitely feel guilty on Tuesday. He could’ve shut down Shiloh’s interest in “Wiley” a long time ago, but he chose to stay silent.

Brad will tell Lucas Jones (Ryan Carnes) none of this would’ve happened if it wasn’t for him, so Lucas may not understand. He won’t think Brad should hold himself responsible, but Brad will disagree. Will Brad also explain why?

It doesn’t look like Brad will divulge the whole ugly story, which would include Nelle Benson’s (Chloe Lanier) involvement. However, Brad could at least admit that a switch happened that night. He might stick with the first version of events he offered Julian Jerome (William deVry). Brad could claim he swapped with a random woman who couldn’t care for her child.

Regardless, Brad will be apologetic over his misdeeds later this week. In the meantime, Peter August (Wes Ramsey) will be torn between his dark past and his bright future. He’s trying to focus on what’s next with Maxie Jones (Kirsten Storms), but his twisted history keeps sucking him back in.

On Tuesday, Maxie will assure Peter she’s ready to go all in. She’ll feel like nothing’s holding them back from the life they want. Peter will desperately hope to keep it that way as he gathers up cash for Shiloh. He’ll secure a huge sum of money within the next couple episodes, which will set up more secrets and shockers.

As for Maxie, she’ll also meet with Damian Spinelli (Bradford Anderson) this Tuesday. Will Spinelli have a warning for Maxie? He may push Maxie to slow down and realize who she’s really dealing with. Spinelli might not have any proof against Peter, but his Spidey senses tell him this guy’s trouble.

Next, Josslyn Jacks (Eden McCoy) will get an explanation. Carly Corinthos (Laura Wright) will sit down with Joss and promise they never wanted to send her away. She may point out the boarding school brochure was for Dev, but it doesn’t seem like it’ll derail Joss’ plan. The mix-up prompted Josslyn’s decision to move in with Jasper “Jax” Jacks (Ingo Rademacher), but clearing it up may not change her mind.

After all, Josslyn doesn’t want Dev to be sent away either. Since all of this has Carly so stressed, Joss may think moving in with Jax is still for the best. Over with Sonny Corinthos (Maurice Benard), he’ll have another chat with Jax. General Hospital spoilers say Jax will make Sonny a promise – most likely regarding Josslyn. He’ll vow to come to Sonny for answers if things get worse.

Josslyn is still dealing with a lot of grief, so she’ll need support no matter where she lives. Jax, Carly and Sonny are all on the same team here. They just need to strategize and accept that Josslyn gets a say in this. Some fantastic scenes are on the way. We’ll give you updates as other GH news comes in. Stick with the ABC soap and don’t forget to check CDL often for the latest General Hospital spoilers, updates and news.