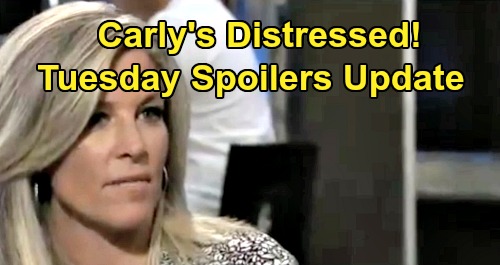 General Hospital (GH) spoilers update for Tuesday, September 3, tease that some excitement’s brewing in Port Charles. A repeat episode aired on Monday due to Labor Day, but Tuesday will deliver a brand-new episode. GH fans won’t want to miss all the action, so we should talk about what’s coming up.

For starters, Sonny Corinthos (Maurice Benard) will handle a problem. Gladys Corbin was paid handsomely to pose as the grandmother who raised Devon “Dev” Corbin aka Dev Cerci (Ashton Arbab). Sonny made it clear that the deal was done, so he won’t approve when Gladys suddenly shows up in Port Charles.

Carly Corinthos (Laura Wright) will seem uneasy as she chats with Mike Corbin (Max Gail) on Tuesday. She’ll contend that nothing’s more important to Sonny than family, but protecting his closest loved ones from Gladys will be his goal here. Sonny will approach Gladys to remind her that their deal won’t be renegotiated. The terms are the terms, so she’d better not even try to test him.

Of course, Gladys seemed to get the picture the last time they talked. Perhaps there’s a different motive behind her trip to Port Charles. It could mean trouble for Dev if people have been asking too many questions. Speaking of questions, Josslyn Jacks (Eden McCoy) will expect plenty of them for Dev at school. She’ll push Dev to arm himself with reasonable answers and not get bogged down with details.

Over with Hayden Barnes (Rebecca Budig), she’ll be eager to get this codicil show on the road. Hayden’s working with Jasper “Jax” Jacks (Ingo Rademacher) in hopes of finding the codicil to Mikkos Cassadine’s (John Colicos) will. They haven’t had any luck so far, but Hayden will insist they have to get this done. She’ll be fed up with hitting roadblocks, so she’ll want to call in reinforcements.

GH viewers know Jax recently fired Curtis Ashford (Donnell Turner) at Aurora, but Hayden will think they should rehire him for his investigative skills. She’ll feel confident Curtis could be the secret weapon they need. Jax will have reservations since he can’t trust Curtis, but Hayden will insist she can. She’ll persuade Jax to make Curtis another offer, which should come in handy with those medical bills.

Jordan Ashford (Briana Nicole Henry) will complain about Curtis playing both sides. She’ll point out that spying on Jax was ill-advised, but she may get on board with Curtis’ new gig. As long as Curtis is being careful, they could really use the money.

Other General Hospital spoilers say Julian Jerome (William deVry) will get updates from Elizabeth Baldwin (Rebecca Herbst). Liz will admit she’s worried about Kim Nero (Tamara Braun). She’ll talk about knowing what it’s like to miss someone so much that you ache for them. Franco Baldwin (Roger Howarth) version of Drew Cain (Billy Miller) is affecting Kim much more than she’s letting on.

Liz will worry about Kim developing feelings for Franco, which certainly seems to be what’s happening. In Oscar Nero Quartermaine’s (Garren Stitt) meadow, Franco will insist Kim made him rethink his whole life. He finally could envision having someone to come home to, so he’ll be sorry he never got to tell Kim before. Kim will be sorry as well, even though this isn’t the real Drew.

General Hospital spoilers say Kim and Franco will lock lips soon, so Cameron Webber (William Lipton) will fume when he sees them. Franco’s memory mess is getting complicated, but things are only going to get worse in the weeks ahead! We’ll keep you posted as other GH news comes in. Stay tuned to the ABC soap and don’t forget to check CDL often for the latest General Hospital spoilers, updates and news.