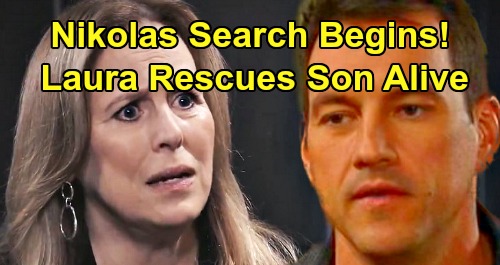 Curtis will assume Spencer is the rightful heir – the key word there being “assume.” The truth is actually far more complicated and likely involves Spencer’s very much alive father, Nikolas Cassadine (last played by Nick Stabile). GH hasn’t confirmed Nik’s survival or comeback, but it’s easy to see the pieces falling into place. There have been tons of Nikolas mentions, which seemingly set up this inevitable return.

The biggest clue of all came from psychic Chelsea Lambas’ (Jen Ray). Her abilities have proven pretty accurate, so we have every reason to believe her. Chelsea told Laura Webber (Genie Francis) her son was in danger and confirmed that it wasn’t the one in Africa. Lucky Spencer (Jonathan Jackson) also confirmed that himself, so Laura was confused and unsettled since she believes Nik is dead.

As for Curtis, he’ll quickly break the trust Jax and Hayden are giving him. He’ll have a clandestine meeting to spill the beans about their mission, and you can probably guess who the other person involved will be! General Hospital spoilers say Laura will be summoned to the park, where Curtis will tell her the top-secret details about this codicil.

It sounds like Laura will be joining the fight against Valentin soon enough. GH viewers know Spencer is fixated on having his birthright stolen from him. Laura will certainly want to make sure the Cassadine fortune lands in the right hands; she just won’t know it belongs in her son’s hands instead of her grandson’s.

General Hospital spoilers say Laura will get a storyline that puts her front and center, which should please fans of Laura and Genie Francis. She may be the one who puts the clues together, discovers Nikolas is alive and saves him from whatever peril Chelsea pointed to. Laura may need some help since this sounds like a difficult quest, but a Nikolas reunion should be the reward for the team effort!

Of course, the question is: Will Nikolas be played by a new actor or someone we’ve seen before? There’s still no word on that yet, although a recent Soap Opera Digest blind item reveals that “chances are a familiar face will soon be reprising a fan-favorite role.” That could be about anyone on any of the four soaps, but Tyler Christopher as Nikolas would definitely fit here.