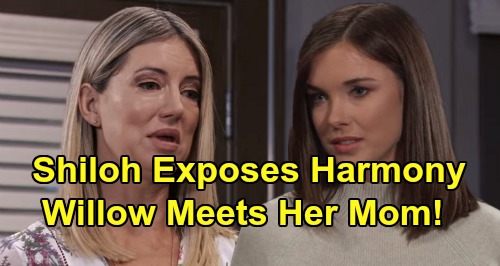 General Hospital (GH) spoilers reveal that Lorraine “Harmony” Miller (Inga Cadranel) may have taken responsibility for most of her actions, but there’s more to the story. GH fans know Willow Tait (Katelyn MacMullen) appreciated Harmony’s part in taking Shiloh Archer (Coby Ryan McLaughlin) down. She can see that her mother wants to make amends and is truly trying to turn things around.

However, it looks like a stunning secret will change everything. This fall, Willow’s world is set to blow up in a big way. She’s in a good place with Harrison Chase (Josh Swickard) right now, so they just decided to live together. They’re just two lovebirds looking forward to the future. Naturally, General Hospital can’t leave them on cloud nine! There’s no drama if they’re it’s all sunshine and butterflies for this duo.

Chase will bring some drama on his end as well, but let’s focus on Willow and her situation. Shiloh is obviously an evil man with plenty of crimes he’s covered up. There’s one in particular that could be of great interest to Willow. General Hospital spoilers say Willow will learn the full scope of Shiloh’s offenses, and it’ll upend her life. There’ll be a day of reckoning for Willow’s mother as a result.

When you put all these clues together, it’s pretty easy to see where this is going. Viewers have certainly suspected that Willow might be Nina Reeves’ (Cynthia Watros) biological daughter. Sasha Gilmore (Sofia Mattsson) is a phony, which means GH will have to provide the real one sooner or later. It’s just soap law!

Of course, there have been some swifts in this story along the way. In the beginning, it felt like Kiki Jerome (Hayley Erin) was the real daughter they had in mind. There’s a good chance Hayley Erin’s departure threw off GH writers’ plans. It wasn’t long until Nina and Willow’s fierce feud developed, which led to rampant mother-daughter suspicions.

Then, General Hospital did something a bit odd. They backed off that feud, which brought questions about their intentions moving forward. It raised the possibility that they might’ve ditched the “Willow is Nina’s true daughter” idea due to Michelle Stafford’s departure.

GH set up the conflict with Stafford in the role and it never really worked as well with Watros. That was no one’s fault. It’s just the way things worked out since we’d seen that tension build between Willow and Stafford’s Nina.

These new General Hospital spoilers seemingly point to the big reveal after all. Perhaps the decision to back off was meant to make viewers forget somewhat. Since we all guessed the outcome early on, maybe they thought it’d be best to take Willow out of Nina’s orbit for a while. The revelation won’t be a shock, but it might pack more of a punch than if they’d still been hitting us over the heads with that conflict.

Whatever the case, it sounds like Shiloh played a part in deceiving Willow. Harmony’s pledge likely involved the illegal adoption, so Shiloh may be waiting for just the right moment to drop this bomb. That brings us to that day of reckoning we mentioned. Willow may rip into Harmony at Pentonville after Shiloh’s wild exposure. Will Willow demand to know who her biological mother is?