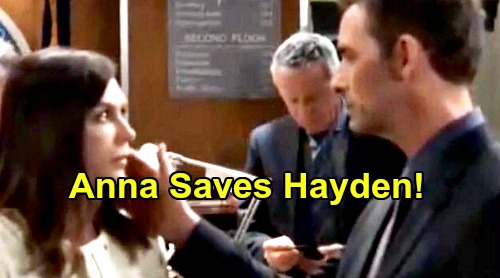 Of course, there could be a couple reasons why GH is pushing Anna and Valentin closer. One reason could be that they may both be in need of love interests soon. Many General Hospital fans have rooted for a “Vanna” pairing, so maybe they’ll get their wish!

If Hamilton Finn (Michael Easton) chooses Hayden Barnes (Rebecca Budig), that could free Anna up for Valentin. Likewise, we have to remember that Nina Reeves (Cynthia Watros) is almost certainly playing Valentin. Her resolve seems to have weakened a bit throughout this Charlotte ordeal, but she may shift her focus back to revenge soon.

GH has been hinting at a Nina and Jasper “Jax” Jacks (Ingo Rademacher) pairing, so they may choose to go there for a while. This could be the perfect opportunity to give Valentin a fresh love interest. It wouldn’t hurt to mix things up and let Valentin find love with Anna. There was a definite spark in their scenes at the PCPD. Some nice chemistry is going on, so it’d be nice for General Hospital to explore it.

However, there could be another reason why Anna saved the day. She may save the day once again and ask for a favor in return. General Hospital spoilers say Valentin will soon target Hayden. It sounds like he’ll start putting some clues together about their scheme. Valentin probably won’t figure out that Nikolas Cassadine (Marcus Coloma), but he’ll figure out enough to know that major trouble’s brewing.

Perhaps Valentin will view Hayden as the weakest link and the one who’d be willing to give answers. He could even threaten Violet Barnes (Jophielle Love) since Charlotte was dragged into this mess. Cassandra Pierce (Jessica Tuck) kidnapped Charlotte, but it was Nikolas who helped her escape – and that can be traced back to Jax. Jordan Ashford (Briana Nicole Henry) has already been on Jax’s back, so Valentin may be next. If he gets nowhere with Jax, Valentin may have to explore other options.

Hayden could be Valentin’s simplest route to finding out what’s going on. She’ll end up waiting nervously on the pier, which could bring another rescue from Anna. Since Anna and Hayden are rivals for Finn’s affections, this would be ideal for their storyline. It’s easy to imagine Anna rushing in and talking Valentin out of threatening Hayden – presumably with a gun.

Bottom line, that close moment between Valentin and Anna clearly mattered. Their growing connection could mean good news for Hayden and opens the door to some new romantic possibilities. General Hospital spoilers say some great drama’s ahead, so stay tuned. We’ll give you updates as other GH details emerge. Stick with the ABC soap and don’t forget to check CDL often for the latest General Hospital spoilers, updates and news.