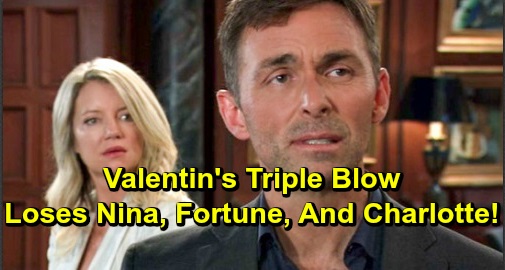 General Hospital (GH) spoilers tease that the ABC soap is gearing up for some major big reveals. GH fans know that whenever a specific date is mentioned often, it means it’ll turn out to be significant. Since we’ve repeatedly heard about New Year’s Eve, you can bet some serious drama will go down as 2019 concludes.

Of course, Nina Reeves (Cynthia Watros) is set to marry Valentin Cassadine (James Patrick Stuart) again on New Year’s Eve – or so he thinks. Although Nina’s been wishy-washy about this revenge plot, she may have just recommitted to it. Liesl Obrecht (Kathleen Gati) spelled out exactly how Valentin pulled off his fake daughter scheme. It seemed to remind tearful Nina of just how manipulative Valentin can be. He took a DNA sample from own dead mother in a casket, so there’s no line he won’t cross.

Now Nina will have to decide how far she’s willing to go as well. Could she manipulate Valentin into believing Charlotte Cassadine (Scarlett Fernandez) isn’t his daughter? It’s tough to buy that Nina would really hurt Charlotte like that. It seems far more likely that any paternity changes will be legit or will at least be the result of another character’s tampering.

However, we do know that Curtis Ashford (Donnell Turner) was just asked to track down Charlotte’s surrogate, Claudette Beaulieu (Bree Williamson). This all appears to be coming together quickly. Is General Hospital setting Valentin up for a triple blow on New Year’s Eve? That could happen if everyone’s plot works out the way he or she wants.

Nina may go through with her plan to dump Valentin at the altar. As for Ava Jerome (Maura West), she’s willing to give Nikolas Cassadine (Marcus Coloma) the codicil if he meets her terms. Nik would do just about anything to get that codicil, so it sounds like he could be poised to drop a bomb on Valentin by New Year’s Eve.

Then, we’ve got Curtis trying to find Claudette for Jasper “Jax” Jacks (Ingo Rademacher). Will Claudette show up on what will undoubtedly be the worst New Year’s Eve of Valentin’s life? Will she admit Valentin isn’t Charlotte’s bio dad and offer proof? Just imagine if Valentin loses his love, his fortune and his daughter all in one miserable night!