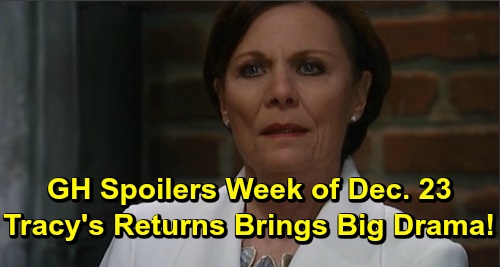 General Hospital (GH) spoilers for the week of December 23-27 tease that some great drama’s on the way. First, Julian Jerome (William deVry) will lose control of his anger. That could have something to do with comatose Lucas Jones (Ryan Carnes) at GH. Julian may lash out when Lucas isn’t waking up fast enough. His guilt could get the best of him and cause quite an outburst.

Over with Peter August (Wes Ramsey), General Hospital spoilers say Maxie Jones (Kirsten Storms) will offer her assistance. Peter scored an exclusive interview with Franco Baldwin (Roger Howarth) for The Invader, so Maxie may help him prep for it. Regardless, you can bet Peter will remain concerned about the darkness he’s buried.

Next, Nelle Benson (Chloe Lanier) will try to remain nonchalant. Perhaps Sam McCall (Kelly Monaco) will push Nelle’s buttons at Pentonville. Nelle might be irritated, but she could tell herself that she’s going to be out of there soon anyway. She’s counting on Martin Gray (Michael E. Knight) to make the “attack” she faced work in her favor.

Hamilton Finn (Michael Easton) and Anna Devane (Finola Hughes) will also face a disagreement. They’ll do some clashing, which should set up a special Finn-centric Christmas episode on December 23. It’s a standalone thing, so don’t worry about any preemptions affecting it. The show will air it on Monday no matter what.

In General Hospital’s special holiday show, Finn will be Ebenezer Scrooge and will surely learn some valuable lessons. The rest of the cast will play fun roles in what appears to be Finn’s dream. Later, Danny Morgan (Porter Fasullo) will share his Christmas wish with Santa. That’ll most likely involve bringing his mom home for the holidays – and that’ll be Jason Morgan’s (Steve Burton) Christmas wish, too.

At the Quartermaine mansion, Tracy Quartermaine’s (Jane Elliot) return will surprise the rest of the family. She’ll make it back from Amsterdam and cause drama right away! Back with Nelle, she’ll be adamant about what she wants. It sounds like Martin will face some serious pressure from his “favorite client” as Nelle calls herself. In reality, Nelle’s probably pretty low on the list, but Martin stands to gain a lot if he helps her.

Elsewhere, Josslyn Jacks (Eden McCoy) will battle confusion. Could that be about Carly Corinthos (Laura Wright) and Sonny Corinthos’ (Maurice Benard) conflict? Joss may figure out that this involves her dad, Jasper “Jax” Jacks (Ingo Rademacher). That could certainly perplex Josslyn and lead to some questions.

Then again, Josslyn might be confused about how Dev Cerci (Ashton Arbab) really feels. He seemed to be making heart eyes at her following their visit with Mike Corbin (Max Gail). Joss may begin to wonder if Dev thinks of her as more than a friend.

Finally, Nina Reeves (Cynthia Watros) will receive a warning. Willow Tait (Katelyn MacMullen) will also end up apologizing, so she might get cross with Nina and ultimately back down. Whatever the case, their feud could be revving up again! We’ll give you updates as other GH news comes in. Stay tuned to the ABC soap and don’t forget to check CDL often for the latest General Hospital spoilers, updates and news.