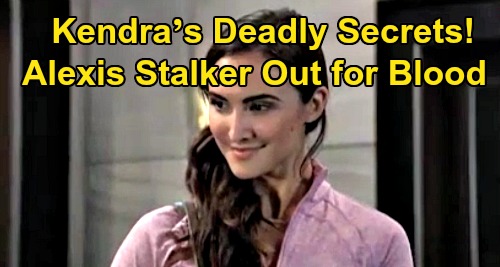 General Hospital (GH) spoilers reveal that Kristina Corinthos-Davis (Lexi Ainsworth) may think she’s free of all the Dawn of Day drama, but she isn’t just yet. That’s because Shiloh Archer (Coby Ryan McLaughlin) tipped someone off to Kristina’s pledge. That someone is Kendra (Michelle Argyris), the personal trainer who approached Alexis Davis (Nancy Lee Grahn) and Diane Miller (Carolyn Hennesy) after their workout bootcamp.

At the Metro Court, Kendra offered her services and chatted them up a bit – laying the groundwork for her evil plan! She also glared at news articles about Alexis being acquitted in the hit-and-run. Kristina lied about Alexis running over Kiefer Bauer (Christian Alexander) intentionally, but Shiloh doesn’t know that. He wouldn’t care even if he did! This is seemingly all about payback.

Shiloh’s busy blackmailing Peter August (Wes Ramsey) and trying to get out of his prison predicament. He doesn’t have the time or resources to tackle Kristina and her family right now. Of course, this is also about Sam McCall (Kelly Monaco).

Shiloh can kill two revenge birds with one stone by sending Kendra to go after Alexis. Both Sam and Kristina would be devastated if their mother ended up injured or dead.

Since Kendra has that crazy, manipulative look in her eyes, we have no doubt that she’s got something dangerous up her sleeve. Some GH fans are calling her the new Nelle Benson (Chloe Lanier)! In other words, Kendra’s the next mystery character with a grudge and a plot for retribution. Like Nelle, Kendra also has the potential to be off her rocker.

It’s easy to imagine Kendra as a previously unrevealed sister of Kiefer’s. After all, they both have “K” names that are a little offbeat. It’s not a stretch to think Kiefer and Kendra would’ve come from the minds of the same parents.

Did Kendra seek peace at Dawn of Day after Kiefer’s death, which ultimately led to Kiefer’s father’s breakdown and eventual demise as well? That’d be two blows for Kendra to recover from, so maybe Shiloh helped her find a new dawn. Then again, maybe Shiloh knows Kendra another intriguing way.

Regardless, General Hospital spoilers say Alexis has a deadly target on her back. There’s no predicting how far Kendra will go to make Alexis pay. Will Alexis wind up in grave danger thanks to vengeful Kendra? What do you think Kendra has in store?