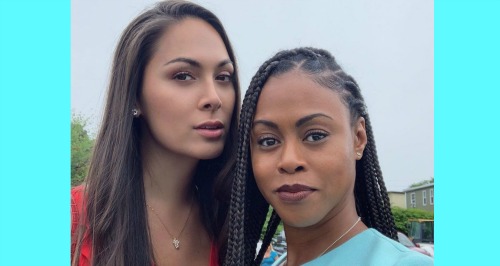 General Hospital (GH) spoilers reveal that one ABC soap star just reunited with a former one for an exciting project. GH fans know Cassandra James as Dr. Terry Randolph in Port Charles. Viewers will also recall when Vinessa Antoine played the part of Jordan Ashford, which has since been filled by Briana Nicole Henry.

Antoine has been hard at work on Diggstown, a Canadian primetime series in which she portrays Marcie Diggs. It turns out James has joined the cast well, so they celebrated this little GH reunion with some fun social media posts. There were thrilled about the opportunity to work with each other on Diggstown and acknowledged their roles as history-makers.

Antoine explained that a bit in an Instagram caption. “Just a couple of gals making history,” the General Hospital alum said. “First black person to lead a dramatic show in Canada and first trans woman on a soap together. Wow! Welcome, sister. So proud to have you here.”

Since Antoine also posted on Twitter, James offered her response over there. She tweeted, “Surprise! Shooting @DiggstownCBC with my @GeneralHospital sister @VinessaAntoine! #transisbeautiful #DiversityandInclusion.” James is definitely happy about bringing the drama with Antoine by her side.

Unfortunately, both actresses had to deal with some negative comments. After one Twitter user sent a hateful tweet that’s now been deleted, Antoine spoke out against her. Since this person was so blunt in her hate, Antoine wasn’t afraid to be blunt right back. “You. Are. An. IDIOT,” Antoine tweeted.

Antoine and James received support from several other Twitter users in the replies. There’s no need to be mean when cast members are just celebrating new roles and sharing a photo. James and Antoine were simply hoping to spread the good news along with a little positivity. Thankfully, they got plenty of that from their loyal fans.

There’s no additional info on James’ new role just yet, but more details should come out closer to airtime. As for what’s next in PC, General Hospital spoilers the drama will continue to heat up. We’ll give you updates as other GH details emerge. Stay tuned to the ABC soap and don’t forget to check CDL often for the latest General Hospital spoilers, updates and news.

Just a couple of gals making history. First black person to lead a dramatic show in Canada and first trans woman on a soap. Together. Wow! Welcome sister. @diggstowncbc @cassandrajames_ So proud to have you here. #diggstowncbc #GH56 #GeneralHospital #OGJordanAshford #terryrandolph

Just a couple of gals making history. First black person to lead a dramatic show in Canada and first trans woman on a soap together. Wow!Welcome sister. @diggstowncbc @cassandrajames_ So proud to have you here. #diggstowncbc #GH56 #GeneralHospital #OGJordanAshford #terryrandolph pic.twitter.com/EmT8IVXA5i