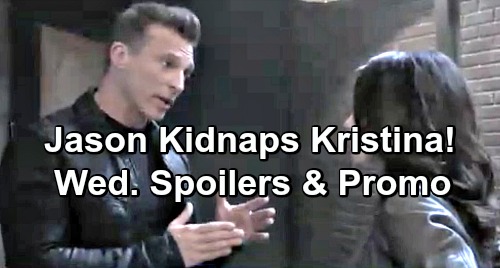 General Hospital (GH) spoilers for Wednesday, April 10, tease that Peter August (Wes Ramsey) will drop Maxie Jones (Kirsten Storms) off at her apartment. She’ll wonder if he’s staying or going as they exchange smiles, so Peter’s got a big decision to make. He might decide to come in and gab with Maxie for a bit, but that could be risky if they don’t want to move too fast.

The attraction’s been building between Maxie and Peter for quite some time, so it could explode into a hookup if they weren’t careful. They’ll have to determine if they can exercise some self-control – or if they even want to. However, chances are good GH will let this romance simmer a little longer before Peter and Maxie take the next step.

Over with Anna Devane (Finola Hughes), she’ll battle more memory concerns. Anna will talk to Dr. Hamilton Finn (Michael Easton) about her past and how Robin Scorpio-Drake (Kimberly McCullough) fits in. Anna will fear that she might’ve misinterpreted her relationship with Robert Scorpio (Tristan Rogers), so she’ll also fear that Robin isn’t really her daughter.

General Hospital spoilers say Finn will just try to be supportive. He’ll be there for Anna no matter what, but Peter is almost certainly the child she’s mistaken about. Meanwhile, Harrison Chase (Josh Swickard) will have a surprise for Willow Tait (Katelyn MacMullen). He’ll mention this interesting gift and nervously hope she’s into it.

It seems Chase’s present will be somewhat unusual, but what better way to cap off a night of disco roller skating? Chase is proving to be a quirky guy, but Willow seems to like that about him. Across town, Jason Morgan (Steve Burton) will assure Sam McCall (Kelly Monaco) that he can do this. He’ll plan to grab Kristina Corinthos-Davis (Lexi Ainsworth) and get her out of the DoD house ASAP.

This situation is growing dire since Kristina’s initiation is already underway. The end of the ceremony brings sex with Shiloh Archer (Coby Ryan McLaughlin), so Jason will be in a race to stop him before it’s too late. Kidnapping Kristina is the quickest and easiest way to do that.

Other GH spoilers say Sonny Corinthos (Maurice Benard) will share the scheme with Alexis Davis (Nancy Lee Grahn). He’ll contend that they have to get Kristina out of there and just deal with the rest later. Right now, Sonny doesn’t care if Kristina throws a tantrum and hates his guts. What matters is saving her from a dark commitment to Shiloh and his creepy cult.

Finally, Harmony (Inga Cadranel) will hand Kristina a beverage and encourage her to drink up. She’ll suggest that it’ll calm Kristina’s nerves, but it should just leave her out of it and unable to think straight. Of course, it’s not like Kristina’s been thinking all that straight anyway! She’s been brainwashed into believing everything Shiloh says, so she’ll continue to blindly follow orders on Wednesday.