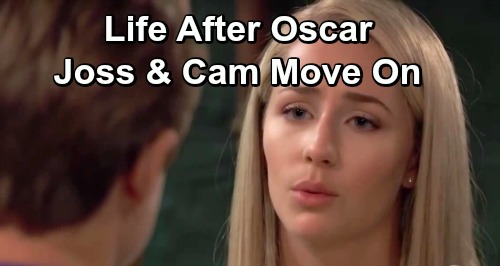 General Hospital (GH) spoilers tease that Josslyn Jacks (Eden McCoy) will have to find a way to move on with her life. She’ll be dealing with a devastating loss soon, so she’ll inevitably be stuck in grief for quite some time. Oscar Nero’s (Garren Stitt) death will leave Joss shattered, but she’ll have to pick up the pieces somehow. GH fans know Oscar wouldn’t want Josslyn to wallow in heartache forever.

After Oscar’s death, Joss will struggle to accept what she can’t change and let go. Oscar was her first love, so this will definitely be a tough goodbye. Jasper “Jax” Jacks (Ingo Rademacher) will be back in town to help Joss cope, so that’s great news. Josslyn should appreciate having her father around to lean on.

Carly Corinthos (Laura Wright) will keep trying to be Josslyn’s rock as well. She was a big help to Joss during her recent hospital freak-out. Carly understands that death is inevitable sometimes, and there’s nothing anyone can do about it. She’ll want Joss to let all her emotions out, but she won’t want her to dwell on the loss forever.

Michael Corinthos (Chad Duell) could play a huge role in helping Josslyn climb out of her upcoming funk. He faced a difficult loss as well when Jonah Corinthos “died.” General Hospital viewers know Jonah is actually living as Wiley Cooper-Jones across town, but Michael has no idea. He learned to work through his grief, so he’ll be able to offer useful tips to Joss in this dark time of her life.

However, it’s Cameron Webber (William Lipton) who could turn out to be the biggest help of all. Since Cam also became close to Oscar, he’ll get Joss’ grief better than anyone. Oscar’s death will certainly be hard on Cameron, too. They can support each other in the aftermath, so General Hospital spoilers say this will likely build to Josslyn’s next romance.

Of course, Joss may resist it at first. She’ll probably feel guilty for her growing feelings and the desire to start fresh with Cameron. Nevertheless, this is what Oscar wants for Josslyn. She’s just a teen, so she has to keep living and find someone who can make her happy. Cam is obviously the perfect fit.