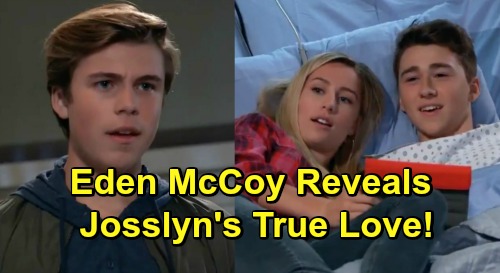 General Hospital (GH) spoilers tease that a teen love triangle is about to heat up. Josslyn (Eden McCoy) grew closer to Cameron (William Lipton) throughout her fake boyfriend plot and he fell harder for her, too. They have a strong connection and enjoy being in each other’s presence.

That’s why Cam was heartbroken when Joss went back to Oscar (Garren Stitt) after learning the truth. Of course, Cameron can’t blame Josslyn for that. It’d be cruel to bail on Oscar when he’s dying of cancer. In fact, Josslyn is the only reason Oscar agreed to keep fighting at all. She has to be there for him throughout his difficult battle.

However, there’s a good chance Oscar will recover thanks to the clinical trial. If he beats this brain tumor and the playing field’s level again, who will Josslyn choose? Eden McCoy weighed in on her two love interests in an interview with Soap Opera Digest. She’s loving her shot at playing out a classic soapy triangle.

McCoy said, “This is the dream! This is the good stuff. I really like the heavy stuff, the dramatics, and I am super-grateful that they trusted me with it.” Of course, GH viewers want to know who McCoy thinks Josslyn should end up with. She admitted she’d be torn in Josslyn’s position. Joss is protective of Oscar and his sensitive soul, but she’s also drawn to how similar she is to Cameron.

Although McCoy wouldn’t come right out and say which team she’s on, her choice is clear. When asked about the bond between Cameron and Josslyn, McCoy’s response told us all we needed to know. “She recognized his true feelings, and I think that deep down, she recognizes hers, too. She knows, ‘Wow, this person really is that person for me,’ as much as she might not want to admit it at first.”

General Hospital spoilers say Cameron will have a rough time while Josslyn’s busy supporting Oscar. He’ll do some destructive things as he tries to cope. Once Oscar’s ordeal wraps up, will Josslyn’s sense of obligation fade? Will she find herself drifting back toward Cameron?

It seems like plenty of fans are rooting for Cameron and Josslyn, so it should be interesting to see where this General Hospital love saga takes them. We’ll give you updates as other GH news comes in. Stay tuned to the ABC soap and don’t forget to check CDL often for the latest General Hospital spoilers, updates and news.