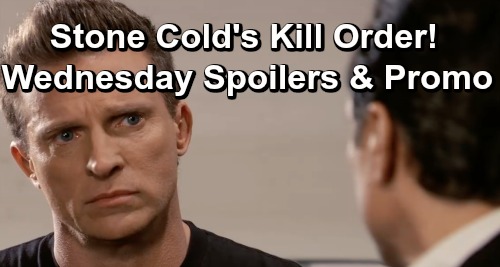 General Hospital (GH) spoilers for Wednesday, April 24, tease that Ava Jerome (Maura West) will have a conversation with Julian Jerome (William deVry) and Curtis Ashford (Donnell Turner). She’ll declare that Ryan Chamberlain (Jon Lindstrom) is dead, but she won’t really believe that. Perhaps Ava will just be trying to get Curtis and Julian off her back. She’s doesn’t need them getting in her way.

Meanwhile, Laura Webber (Genie Francis) will talk Dr. Kevin Collins (Jon Lindstrom) into helping Ava. She’ll assure Kevin that she’s on board with the plot, so Kevin will call Ava up and insist that they’re in. Laura will provide some help as their scheme takes shape, which means jealous Ryan Chamberlain (Jon Lindstrom) should be out of hiding soon enough.

At the safe house, Kristina Corinthos-Davis’ (Lexi Ainsworth) phone call to Valerie Spencer (Paulina Bugembe) will cause drama. After Kristina’s caught in the act, Alexis Davis (Nancy Lee Grahn) will demand to know who her daughter called. She’ll be a mess over the possibility of their desperate plan falling apart, but Dr. Neil Byrne (Joe Flanigan) will offer some comfort.

Next, General Hospital spoilers say Willow Tait (Katelyn MacMullen) will make her stance crystal clear. She just lashed out at Harmony Miller (Inga Cadranel) for not protecting her the way she should have. Willow called Harmony her mother, so we finally got confirmation on their link.

However, Willow will have no interest in reconnecting or getting drawn back into Dawn of Day. She’ll insist her mom means nothing to her now and warn Harmony to keep her distance. Elsewhere, Harrison Chase (Josh Swickard) will want the truth from Michael Corinthos (Chad Duell). He suspects Kristina was kidnapped by her family, so he’ll want Michael to spill all the details.

Michael won’t cooperate, but that won’t stop Chase from lecturing him. He’ll argue that Michael just gave Shiloh a weapon, so they’ll both have concerns about how this is going to play out. At the DoD community house, Sam McCall (Kelly Monaco) will be in a tight spot. Shiloh just took his shirt off and made a speech about how bodies shouldn’t be hidden. He then took up to the creepy lair in his attic.

Sam was starting to unbutton her own blouse when GH fans last saw her, but Shiloh may stop her on Wednesday. Perhaps he’ll claim this was a test and Sam passed. Shiloh seems to like making Sam uncomfortable, but he usually saves sex for someone’s initiation into “The Trust.”

Later, they’ll be clothed again as Shiloh tells Sam they’re ready to take this to the next level. He may begin trust proceedings now that Sam’s been proven herself. Finally, General Hospital spoilers Sonny Corinthos (Maurice Benard) will deliver a dangerous order. He’ll be fed up with Shiloh’s grip on Kristina, so he’ll want to take care of him once and for all.

Sonny will want Jason Morgan (Steve Burton) to eliminate Shiloh, but their deadly plans could hit a few snags! We’ll give you updates as other GH news comes in. Stay tuned to the ABC soap and don’t forget to check CDL often for the latest General Hospital spoilers, updates and news.