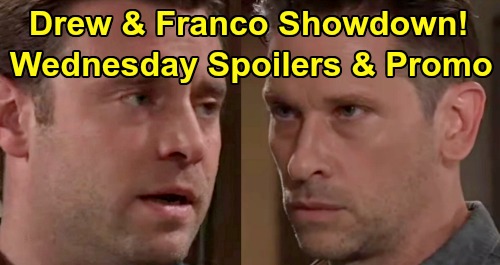 General Hospital (GH) spoilers for Wednesday, August 14, tease that a softball game will get underway. GH fans can expect Peter August (Wes Ramsey), Maxie Jones (Kirsten Storms) and Liesl Obrecht (Kathleen Gati) to don uniforms for the big game. Peter will jokingly try some mind games on Maxie, but she’ll insist they aren’t going to work. Maxie’s competitive side will come out as she plays to win!

Lulu Falconeri (Emme Rylan) will also be on hand for the softball antics. She’ll ask if someone would like to make this interesting, so it sounds like a fun bet is coming up. General Hospital spoilers say two teams will battle it out, but only one can emerge victorious.

Meanwhile, Lucas Jones (Ryan Carnes) will be bummed over Julian Jerome’s (William deVry) news. Julian’s planning on leaving Port Charles with Kim Nero (Tamara Braun), which is a shame since Julian has started to bond with Lucas. He was also set to have more of a presence in “Wiley Cooper-Jones’” life, so Lucas will be disappointed.

However, Kim won’t want to stop this father-son relationship from developing. She’ll tell Lucas to say the word and she’ll tell Julian she has to do this alone. Kim won’t want to hold their family back in any way, but Lucas may assure Kim it’s fine. He’ll share some tender moments with Julian as they prepare for the goodbye that’s looming.

Of course, psychic Chelsea Lambas (Jen Ray) insisted Ava Jerome (Maura West) shouldn’t worry about her brother. Chelsea’s convinced that Julian isn’t going anywhere, and that’ll undoubtedly turn out to be true. GH viewers will be curious to see what changes Julian’s mind and when he makes that call.

Until then, Hayden Barnes (Rebecca Budig) will rev up the pressure. She’ll insist the clock is ticking and urge Jasper “Jax” Jacks (Ingo Rademacher) to join her latest mission. Hayden plans to head over to Spoon Island undetected, but that’s easier said than done! General Hospital spoilers hint that Hayden may get busted, so she should find herself in more trouble to wiggle out of.

Other General Hospital spoilers say Franco Baldwin (Roger Howarth) will struggle to understand his current situation. He was just handed a mirror, so he’ll have to accept that everyone in his room may be right. Franco isn’t Drew Cain (Billy Miller) like he thinks he is, but it seems he’ll plan to leave GH and seek answers elsewhere. Drew will block Franco’s path and insist he’s not leaving, so a bit of a showdown’s brewing.

As for Elizabeth Baldwin (Rebecca Herbst), she’ll share info about her life with Franco and hope that it brings something back. Liz will be desperate for Franco to remember, but she may be out of luck for now! We’ll keep you posted as other GH details emerge. Stay tuned to the ABC soap and don’t forget to check CDL often for the latest General Hospital spoilers, updates and news.