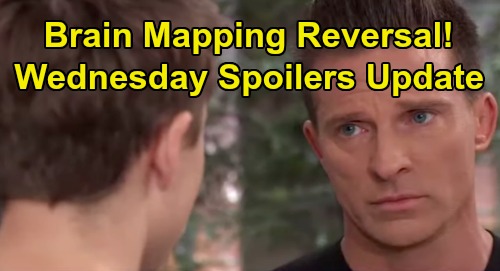 General Hospital (GH) spoilers update for Wednesday, August 28, tease that Jasper “Jax” Jacks (Ingo Rademacher) will face Nina Reeves’ (Cynthia Watros) wrath. She’ll rip into Jax for lying from day one and try to get some Cassandra Pierce (Jessica Tuck) answers out of him. Nina will insist her daughter’s life is at stake and hope that Jax can be honest about his agenda.

Naturally, Jax won’t spill all just because Nina’s upset. He’ll do his best to handle this tricky situation and settle Nina down on Wednesday. If Jax knows anything helpful to Sasha Gilmore’s (Sofia Mattsson) case, he might share it. Otherwise, Jax will keep those secrets locked up tight. His mission is too important to let slip away in an instant.

Meanwhile, Michael Corinthos (Chad Duell) will explain the shocking Cassandra story to Sonny Corinthos (Maurice Benard). He’ll share that Cassandra was out for revenge on Nina, so she targeted Sasha. Once Michael fills his dad in, they’ll head to the PCPD together. Maybe they’ll get some details about the efforts to find Cassandra and end her reign of terror.

Mac Scorpio (John J. York) will also get an appealing offer on Wednesday. Jordan Ashford (Briana Nicole Henry) will pass it along, so it might involve Mac sticking around at the station. Could his time as police commissioner be extended or could Jordan have another role in mind for him? Regardless, Mac will have something big to mull over.

Other General Hospital spoilers say Jordan will snap at Curtis Ashford (Donnell Turner). She’ll flip out over Curtis bordering on corporate espionage, so it sounds like he’ll be forced to reveal some things he’d rather not talk about. However, Curtis will keep as much of it under wraps as he can. He’s entered dangerous territory by working for Valentin Cassadine (James Patrick Stuart), but he’ll think he’s got this.

Over with Rocco Falconeri (O’Neill Monahan), he’ll have a bad attitude over some activity he wants to quit. Rocco will point out that his dad was allowed to quit, so he’ll think he should be able to as well. Lulu Spencer (Emme Rylan) will deal with Rocco’s outburst, but it looks like Dustin Phillips (Mark Lawson) may save the day. He’ll be a bit of a rescue ranger on Wednesday, so that may involve Lulu’s parental dilemma.

Dante Falconeri (Dominic Zamprogna) isn’t coming home anytime soon; he may never come home at all! Lulu has accepted this, but life is still going to be tough for her as a single mom. She’ll be in over her head as Rocco struggles to cope, so Dustin’s assistance should be appreciated.

Next, let’s talk about Franco Baldwin (Roger Howarth). He just showed up at home, so Elizabeth Baldwin (Rebecca Herbst) will get a chance to make her heartfelt spiel. She’ll assure Franco of her great love for him, but it won’t be enough. Franco can’t help it, but he doesn’t remember his family and feels nothing for them. General Hospital spoilers say Franco will reject Liz and leave her in drowning in sorrow.

At GH, Jason Morgan (Steve Burton) will get grilled by Cameron Webber (William Lipton). Cam will point out that Jason can relate, so it seems he’ll be talking about Jason and Franco’s similar situations. Jason’s brain damage once left him in Franco’s position. He didn’t want to be the man he used to be and would’ve resented being forced into his former self.

Jason will also have a tough heart-to-heart with Monica Quartermaine (Leslie Charleson). That discussion with Cam might lead Jason to ruminate on the past and talk to Monica about it. Of course, some awful Drew Cain (Billy Miller) news will hit Port Charles at some point. That’ll be another conversation Monica and Jason need to have, but it doesn’t appear it’ll happen on Wednesday.