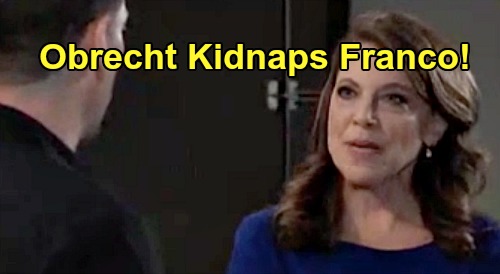 General Hospital (GH) spoilers tease that Liesl Obrecht (Kathleen Gati) will remain worried about Franco Baldwin (Roger Howarth) and the life he’s throwing away. She recently delivered some tough love during a visit with Franco, which included a slap. Liesl just wants to knock some sense into him and help him understand he needs to be living as Franco, not Drew Cain (Billy Miller).

Unfortunately, Franco stood his ground and expressed no interest in living in Franco’s world. He just wants to ignore his DNA and focus on what his memories tell him. However, Liesl definitely isn’t a quitter. She’s one of the most stubborn General Hospital characters around! Liesl pointed out that Franco was her closest and perhaps only true friend, so who’s Dr. O going to confide in without him?

That could be partial motivation for taking drastic action. Of course, Liesl will think of Franco’s family as well. She acknowledged how hard Franco fought for Elizabeth Baldwin (Rebecca Herbst) and their love. Since Franco doesn’t have the will to fight now, Liesl may just have to do it for him. She’s the kind of gal who’ll do anything to get what she wants.

On September 5, General Hospital spoilers say Liesl will rely on a desperate strategy. She’ll take matters into her own hands and do something that’s very Liesl-like. The next day, Liesl will pull off her goal. Could these GH spoilers be connected to Franco? Will Liesl use a familiar tactic by kidnapping Franco and holding him hostage?

Here’s why we think things could be headed in that direction. For starters, it’s not a stretch since Liesl held Peter August (Wes Ramsey) captive last summer. In fact, that’s another reason why GH may be gearing up for another Dr. O hostage crisis. You may have heard that Patrick J. Gibbons Jr. will reprise his role as Wyatt Hoover soon. He’s the Raging Raccoon troop member who found Peter in the middle of nowhere.

There are no details on Wyatt’s stint just yet, but the timing fits. We can certainly imagine the kid stumbling across another hostage. It’d be like a running gag and would be particularly interesting since Wyatt knows Franco, but “Drew” won’t know Wyatt. It’d bring some funny confusion for the poor scout! He might have the chance to be a hero again.

Gibbons retweeted an article that was all about Franco’s memory-mapping twist, so that suggests he’s connected to this story. As for what Liesl’s up to, she may have some alternative plan in mind to jog Franco’s memory. Liesl could at least buy some time if Franco’s about to skip town. As soon as that ankle monitor comes off, there’ll be nothing forcing Franco to stick around – except maybe Obrecht!

It looks like some exciting drama’s ahead in Port Charles. We’ll give you updates as other GH news comes in. Stay tuned to the ABC soap and don’t forget to check CDL often for the latest General Hospital spoilers, updates and news.