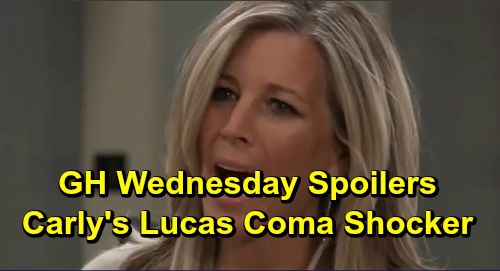 General Hospital (GH) spoilers for Wednesday, December 4, tease that the moment of truth will arrive for Willow Tait (Katelyn MacMullen). She was terrified about taking a pregnancy test for a couple reasons. Basically, Willow’s nervous she will be pregnant…and nervous she won’t be! She understands a baby would turn her life upside down, but this baby would also be hers to keep and love.

Since Sasha gave Willow the nudge she needed, Willow will return with the pregnancy results on Wednesday. Sasha will wonder if Willow’s pregnant or not, and General Hospital spoilers reveal that Willow is indeed expecting Harrison Chase’s (Josh Swickard) child. She’ll be excited over the news, but the next step should seem just as daunting as it did before. Telling Chase about their impending bundle of joy won’t be an easy task for Willow, but she’ll have to figure out some way to do it.

For now, Chase will be busy with important detective work. When Carly Corinthos (Laura Wright) shows up at GH, she’ll demand to know what happened. Carly should be horrified when she gets updates on the whole story, but she’ll mainly be focused on Lucas Jones’ (Ryan Carnes) critical condition. When he comes out of surgery, General Hospital spoilers suggest he’ll be in a coma.

Brad Cooper (Parry Shen) was in much better shape that Lucas after the crash, but “Wiley Cooper-Jones” (Erik and Theo Olson) still needs someone to care for him while his dads are recovering. General Hospital spoilers say Michael Corinthos (Chad Duell) will step up to help on Wednesday, so we should get some cute father-son moments. Michael will remain in the dark on their true connection for the time being, but his scenes with “Wiley” are always adorable.

Other General Hospital spoilers say Bobbie Jones (Jacklyn Zeman) will call someone over to GH immediately. She may not realize Julian Jerome (William deVry) has already been informed of the crash. Julian was a mess when he realized Lucas got caught in his Brad murder plot, but all he can do now is hope for a miracle.

As for Carly, she’ll end up contacting a specialist within the next couple episodes. General Hospital insiders insist that specialist will be Dr. Griffin Munro (Matt Cohen), so it sounds like we can expect his return to Port Charles soon. Until then, Hamilton Finn (Michael Easton) will fly into a rage. As Anna Devane (Finola Hughes) stands there looking taken aback, Finn will demand to know what’s going on.

This may tie in with Hayden Barnes (Rebecca Budig), who left a letter saying she was in some trouble and had to leave for her own safety as well as her daughter’s. Finn won’t get all the answers he’s seeking, but he’ll need to turn his attention to Violet Barnes (Jophielle Love) soon anyway. He’ll fret about how he’s going to break the news that her mommy’s gone.

Next, Jasper “Jax” Jacks (Ingo Rademacher) will confront Valentin Cassadine (James Patrick Stuart) shove him toward a wall. He’ll assume Valentin’s the reason Hayden disappeared, but that was actually Nikolas Cassadine (Marcus Coloma) who ran her off. It turns out Nikolas will make another move Jax would disapprove of on Wednesday. He’ll head to Shadybrook, where’ll he’ll leave Ava Jerome (Maura West) completely bewildered.

Ava will wonder how Nik can be dead and still be in the room with her. She’ll fear she’s losing her mind, but Nikolas will suggest she’s going to make amends. It sounds like Nikolas will reveal the entire scheme to Ava and convince her she needs to keep her mouth shut. Ava owes Nikolas for recanting her statement against Valentin and will realize plan would benefit Spencer Cassadine (Nicholas Bechtel), so she should go along with it.