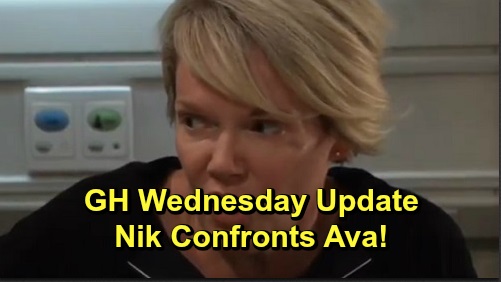 General Hospital (GH) spoilers update for Wednesday, December 4, teases that some bombshells are brewing. We should mention that a preemption is possible due to continued impeachment hearings coverage. If that happens, GH will likely bump Wednesday’s episode to Thursday. That’s just a programming note to remember! Now let’s talk about the excitement that’s building in Port Charles.

First, Ava Jerome (Maura West) will get a shocking visit. She’ll probably think she’s imagining things again, but it looks like Nikolas Cassadine (Marcus Coloma) will be there in the flesh. Ava won’t understand how Nikolas can be dead and right there next to her, but he won’t have time for much chit-chat. Nik will want to get down to the business of why he popped in. He’ll insist Ava’s going to make amends – presumably for recanting her statement against Valentin Cassadine (James Patrick Stuart).

Nikolas will likely demand Ava’s cooperation on this portrait situation. He’ll also want to make sure Ava stays quiet about his survival. Nik will think Ava owes him that much since she caved into Valentin for a face fix. Ava won’t be happy about committing herself over Nikolas’ deception, but she may get on board with his plans – mostly for Spencer Cassadine’s (Nicolas Bechtel) sake.

Meanwhile, Jasper “Jax” Jacks (Ingo Rademacher) will launch an attack on Valentin. He’ll shove Valentin up against a wall and ask what he’s done with Hayden Barnes (Rebecca Budig). Valentin will undoubtedly insist that he isn’t behind Hayden’s disappearance. That’s true thanks to Nikolas’ trick, which convinced Hayden to ditch Port Charles and go underground.

Nina Reeves (Cynthia Watros) will get a big surprise on Wednesday, so perhaps she’ll witness this altercation. It could leave her with even more questions about whether to focus on love or revenge. Over with Hamilton Finn (Michael Easton), he’ll angrily push someone to tell him what’s going on. Anna Devane (Finola Hughes) will be on hand to support Finn as he continues to deal with Hayden’s abrupt departure.

Finn will ultimately have to settle down and concentrate on Violet Barnes (Jophielle Love). He’ll have no idea when Hayden might return, so he’ll fret about what he’s going to tell their daughter. At GH, Carly Corinthos (Laura Wright) will corner Harrison Chase (Josh Swickard) and push him to tell her what happened. She’ll be concerned about Lucas Jones (Ryan Carnes), who was injured in a car crash along with Brad Cooper (Parry Shen).

The driver’s side had the most damage, so Lucas is in pretty bad shape. He’s been taken to surgery, and insiders reveal he’ll be in a coma afterward. General Hospital spoilers say Carly will contact a specialist to help Lucas later this week, so it looks like Dr. Griffin Munro (Matt Cohen) will ride to the rescue within the next week or so.

Other General Hospital spoilers say Bobbie Spencer (Jacklyn Zeman) will worry about Lucas as well. On the phone, Bobbie will urge someone to get to the hospital right now. If Julian Jerome (William deVry) steps away or Bobbie doesn’t know he’s there yet, he might be the one she calls. Regardless, Julian will battle remorse for plotting to murder Brad and putting Lucas in this terrible situation by mistake.

Finally, Willow Tait (Katelyn MacMullen) will return after taking the pregnancy test Sasha Gilmore (Sofia Mattsson) provided. Sasha will wonder what the outcome is, so Willow will tell her the news. Previous info pointed to Willow actually being pregnant, but now reliable insiders insist it’s just a false alarm.

Sometimes the show’s spoilers can be awkwardly worded or misleading, so perhaps that’s to blame for the pregnancy confusion. It’s possible Chase will find a clue eventually and simply assume Willow’s expecting. Whatever the case, the latest info from dependable sources says Willow isn’t pregnant after all. Willow herself can set the record straight for sure when she reveals the results to Sasha on Wednesday.