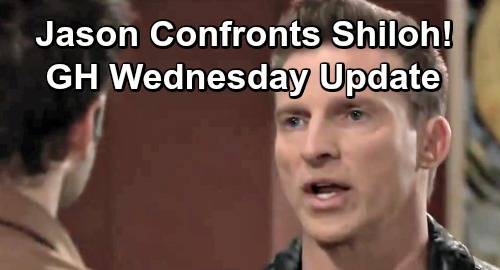 General Hospital (GH) spoilers for Wednesday, February 13, tease that Shiloh Archer (Coby Ryan McLaughlin) will welcome Jason Morgan (Steve Burton) to Dawn of Day again. He’ll wonder what brings Jason by the house, so Jason will mention that he has questions. Shiloh urged Jason to pop in anytime if he wanted to seek more info. Jason will decide to take advantage of that offer, so Shiloh will get grilled.

However, GH fans know it’s awfully tough to rattle Shiloh. No matter what anyone throws at him, Shiloh simply smiles and says all the right things. That should be the case this time as well, but Jason will still hope he can score takedown ammunition. He’ll do everything in his power to speed this process along.

Sam McCall (Kelly Monaco) will also do her part on Wednesday. General Hospital spoilers say the Valentine’s Day party will begin soon, so Sam will pretend she’s single and ready to mingle. She’ll insist she isn’t an item with Jason and hope the other guests buy it. Sam will certainly try to sell that to Shiloh on new GH episodes later this week.

Meanwhile, Kristina Corinthos-Davis (Lexi Ainsworth) won’t want her mom to give up on DOD. She’ll think Alexis Davis (Nancy Lee Grahn) bailed before she had a chance to dig deeper. Alexis actually forced herself to make some helpful admissions during the last seminar. Nevertheless, the Dawn of Day scene just isn’t her style. Alexis will plan to stick with therapy in an office setting instead.

Over with Brad Cooper (Parry Shen), he’ll be flustered after Willow Tait (Katelyn MacMullen) appears. General Hospital spoilers say Willow will get a bit too close to “Wiley” Cooper-Jones. As Brad holds the baby, he’ll grow awfully concerned. Willow poses a huge threat to his baby swap secret, so it’s easy to see why Brad will be on edge.

It looks like Brad’s nervous demeanor will tip Willow off, so she’ll want everything out in the open. Willow will push Brad to admit that he knows who she is. Of course, Willow doesn’t have the whole story. Even if Brad confesses that he knows she’s Wiley’s birth mom, he’ll leave out some crucial details.

Willow has no idea that the baby she’s longing for actually belongs to Michael Corinthos (Chad Duell) and Nelle Benson (Chloe Lanier). Speaking of Michael and Nelle, a Valentine’s Day card will connect them on Wednesday. It seems Nelle will make one for Michael and send it his way.

There’ll most likely be mysterious message written inside. That’s just how Nelle rolls! She can’t stand it if she’s not stirring the pot a little, so Michael could be shaken by his ex’s note.

Harrison Chase (Josh Swickard) will poke fun when he sees that someone made a valentine for Michael. Naturally, he should change his tune when he learns who it’s from. Chase knows Nelle is a full-blown psycho, so any communication from her is frightening.

Other General Hospital spoilers say Anna Devane (Finola Hughes) will cause some drama. She’ll rile Robert Scorpio (Tristan Rogers) by crashing his mission with Dr Hamilton Finn (Michael Easton), but she’ll truly believe she can help. Robert will think their plan will be botched if Dr. Cabot spots Anna, but she’s a pro at handling stuff like this. Anna will undoubtedly have a solution for any problem that arises!

It sounds like some thrilling moments are ahead on General Hospital. We’ll give you updates as other GH news comes in. Stick with the ABC soap and don’t forget to check CDL often for the latest General Hospital spoilers, updates and news.