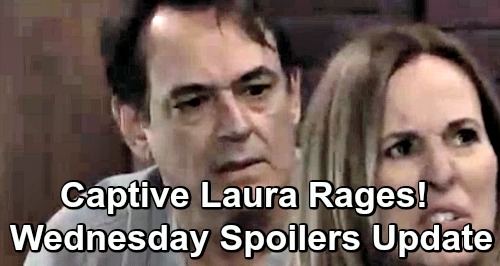 General Hospital (GH) spoilers for Wednesday, February 20, tease that Ryan Chamberlain (Jon Lindstrom) will enjoy taunting Laura Webber (Genie Francis) and Dr. Kevin Collins (Jon Lindstrom). After locking them up in some dark corner of Ferncliff, Ryan will talk about the voices of the past. He’ll gloat as Laura glares and snaps that he’s a monster. She’ll be furious over all the destruction Ryan has caused.

Meanwhile, Nina Reeves (Michelle Stafford) will have a plan she needs assistance with. She’ll turn to someone who might be able to help her, so let’s hope they can pull it off. Over with Valentin Cassadine (James Patrick Stuart), he’ll make Sasha Gilmore (Sofia Mattsson) squirm. Sasha’s eyes will widen as Valentin notes that she tried to hinder his marriage plans.

Of course, Sasha may argue that she genuinely cares about Nina and was just looking out for her. She doesn’t like all this manipulation, but she doesn’t want Nina to get her heart broken. However, Valentin may remind Sasha that he wanted to make Nina happy and score a reunion. If Sasha blows everything up, you can bet Valentin will make her pay the price.

Other General Hospital spoilers say Maxie Jones (Kirsten Storms) and Peter August (Wes Ramsey) will head to GH. They’ll hand over the DNA sample and await news on Sasha’s link to Nina. Peter and Maxie will be anxious to find out the truth one way or the other. If Sasha isn’t Nina’s daughter, they can figure out how they’re going to handle it.

Sadly, Peter and Maxie may not get a definitive answer. General Hospital spoilers say they’ll run into some sort of problem, so they may not be able to get proper results. Then again, there’s a chance the results will confirm Sasha has blood ties to Nina. It’s a possibility since a legitimate DNA test was never ordered. Whatever the case, Maxie and Peter will have to ponder some puzzling issues.

Elsewhere, Ava Jerome (Maura West) will face criticism from Julian Jerome (William deVry). He’ll probably complain about Ava’s support for Franco Baldwin (Roger Howarth). Ava trusts that Franco couldn’t have killed Kiki Jerome (Hayley Erin), but Julian may think she’s putting too much faith in him. Maybe Julian will urge Ava to put her faith in the PCPD instead and trust that they’ve got the right man.

General Hospital spoilers say Ava will refuse and urge Julian to cool it. She’s already at the end of her rope, so she won’t appreciate her brother’s complaints. Across town, Cameron Webber (William Lipton) will explode as Elizabeth Webber (Rebecca Herbst) continues to stand by Franco. Cam will think this is a matter of life and death. He won’t like the idea of Liz staying connected to a crazy murderer.

Liz will insist that Franco isn’t guilty this time around, but Franco’s imminent plea will leave her shaken. He’ll admit to the murders in court, so Liz and Ava will certainly be confused. In fact, Franco’s guilty plea will cause shock over Port Charles! He’s just doing this to go along with Jordan Ashford’s (Briana Nicole Henry) scheme, but he’ll ultimately regret lying to Liz and everyone else.

General Hospital fans won’t want to miss all the chaos ahead. We’ll give you updates as other GH details emerge. Stick with the ABC soap and don’t forget to check CDL often for the latest General Hospital spoilers, updates and news.