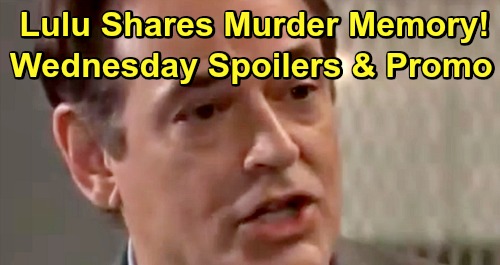 General Hospital (GH) spoilers for Wednesday, February 27, tease that Lulu Falconeri (Emme Rylan) will need some help from Maxie Jones (Kirsten Storms). Despite Franco Baldwin’s (Roger Howarth) convincing claims during his interview, Lulu feels like something’s off. She’ll continue to mull everything over and eventually reach a startling conclusion.

On Wednesday’s GH episode, Lulu will note that she missed a big part of these murders. She might dig around on her laptop and discover the discrepancy again. Will Lulu remember that “Dr. Kevin Collins” aka Ryan Chamberlain (Jon Lindstrom) had nine victims on his list and her research only showed seven? That seems like an excellent possibility.

Even if Lulu’s discovery involves the more recent murders, it should work to her advantage as she seeks answers. At Ferncliff, an enraged Ryan will rant at Franco for lying. He’ll insist that the truth must be told, so it looks like Franco will crack under the pressure.

Franco believes he can trust “Kevin,” so he’ll admit this situation is going to kill him. It must’ve been brutal to pretend Kiki Jerome’s (Hayley Erin) death was beautiful art. Of course, spilling Jordan Ashford’s (Briana Nicole Henry) secret plan to the killer could end in disaster! Things could get even trickier once Ryan knows what’s really happening.

Other General Hospital spoilers say Elizabeth Webber (Rebecca Herbst) will be distraught. She’ll wonder how she can believe in Franco after that interview he gave. However, Drew may urge Liz to have faith. Thanks to his instincts and a chat with Curtis Ashford (Donnell Turner), Drew should remain confident there’s more to the story.

Over with Cameron Webber (William Lipton), he’ll be baffled and hurt by Franco’s latest interview. Naturally, Cam will be angry as well. He’ll end up venting to Josslyn Jacks (Eden McCoy) and Oscar Nero (Garren Stitt) on Wednesday, so that should help him feel a little better. Cameron will suggest that the whole world knows Franco is a killer. He’ll hope his family can move on and start to heal soon.

Meanwhile, Ava Jerome (Maura West) will face another marriage naysayer. Scott Baldwin (Kin Shriner) will be next in line to warn Ava about the mistake she’s making. He’ll wonder when “Kevin” will kick Ava to the curb like he did Laura Webber (Genie Francis). Scott won’t want Ava to get her heart broken, but she views “Kevin” as her lifeline. She’ll refuse to slow down or back off in any way.