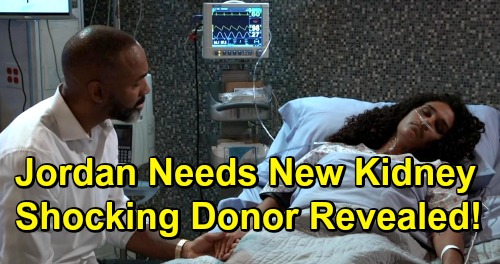 General Hospital (GH) spoilers tease that Jordan Ashford (Briana Nicole Henry) will be fading fast. She faced emergency surgery, but that won’t be enough to save her life. As time goes on, Jordan’s condition will get even worse. During the week of March 4-8, Curtis will have some devastating news to pass along. Perhaps he’ll learn that Jordan’s going to die without a kidney transplant.

Stella Henry (Vernee Watson) indicated that one of Jordan’s kidneys was punctured and severely lacerated. Her other one didn’t fare much better. It looks like Jordan may not be able to survive without a donor. That brings us to the question of who the donor might be.

General Hospital spoilers say T.J. Ashford (Tajh Bellow) will want to help on the new GH episode March 8. Maybe he’ll volunteer to donate a kidney. T.J. might undergo some tests to see if that’s possible, but there are no guarantees. He’ll naturally want to do anything he can to save Jordan’s life, but her doctors may have to keep searching if T.J. isn’t a match.

Of course, we’ve also got some teen trouble brewing. Oscar Nero (Garren Stitt), Josslyn Jacks (Eden McCoy), Cameron Webber (William Lipton) and Trina could get into a car accident. They’re planning an ill-advised trip to Niagara Falls, so GH has given us the ideal setup.

Josslyn is already down one kidney and can’t donate. It appears Cameron will emerge unscathed, so there’s no reason for him to get involved here either. That could leave Trina (Sydney Mikalya), who reappeared out of nowhere and could donate if she finds herself brain dead in a coma. Trina’s organs might be donated, so her kidney could help Jordan.

However, Oscar might be another option to consider. Cancer patients are typically discouraged from donating organs, but sometimes it’s OK if the tumor’s isolated to the brain and hasn’t spread past a certain point. Besides, soaps aren’t known for being incredibly accurate when it comes to a medical crisis! They may ignore the issue and let Oscar be the hero no matter what – especially if Jordan’s desperate enough.

If Jordan can’t find another match and Oscar’s health is headed downhill fast, perhaps he’ll donate a kidney. Oscar doesn’t have long left to live anyway, so it’s not like he’ll be using it. Whether he’s in a coma or not, this could be a final good deed for the teen.