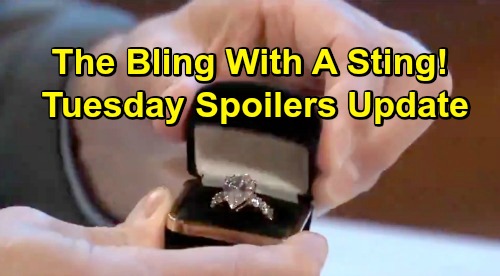 General Hospital (GH) spoilers for Tuesday, February 26, tease that Sam McCall (Kelly Monaco) will get a shock. When she realizes Shiloh Archer (Coby Ryan McLaughlin) is standing behind her at GH, she’ll fear her plot’s been blown. Thankfully, Sam isn’t a quitter! She’ll shift her strategy and slap Jason Morgan (Steve Burton) after getting caught in that lip lock.

Sam will feign anger toward Jason for refusing to take no for an answer. She’ll make it clear that they’re over for good and most likely lean on Shiloh. Sam will hope her desperate tactic can keep the scam going for a while longer. Nearby, Curtis Ashford (Donnell Turner) will worry about Jordan Ashford (Briana Nicole Henry). He’ll determine that her life’s still on the line after her emergency surgery.

T.J. Ashford (Tajh Bellow) will be around to await updates and provide support. He’ll push Curtis to have faith that Jordan will make a full recovery. Neither one of them will want to think about the alternative. Over with Drew Cain (Billy Miller), a surprising message is headed his way. It’ll be a secret of some sort, so it sounds like Drew will have to keep it on the down low.

Other General Hospital spoilers say Alexis Davis (Nancy Lee Grahn) will confide in Dr. Neil Byrne (Joe Flanigan) again. Their upcoming therapy session will bring an interesting admission. Alexis will argue that she’s dangerous and explain why. This probably goes back to her earlier confession about being attracted to dangerous men. Alexis may think peril follows her everyone she goes!

Kristina Corinthos-Davis (Lexi Ainsworth) will land in some peril of her own soon. She’ll walk in on a tricky situation at GH, so this might be about Shiloh, Sam and Jason. General Hospital spoilers state that Shiloh will focus on Kristina in the coming weeks. As his suspicions about Sam rev up, Shiloh may use Kristina to get his revenge.

Next, Lulu Falconeri (Emme Rylan) will battle her fears and prep for her interview with Franco Baldwin (Roger Howarth). Franco will be just as nervous, but he’ll have to play it cool if he hopes to convince the world he’s a coldhearted killer. Their recorded conversation will line right up with Jordan’s plan, even though Jordan won’t be able to offer guidance.

Elsewhere, “Dr. Kevin Collins” aka Ryan Chamberlain (Jon Lindstrom) will make his engagement official. He’ll give Ava Jerome (Maura West) some bling to seal the deal, so she’ll be over the moon. General Hospital spoilers say Ava will start to embrace this wedding idea. She’ll want to let everyone know she’s going to marry the man of her dreams.

Sadly, that man’s a nightmare under the surface. Ryan killed Kiki Jerome (Hayley Erin), so that’s a ticking time bomb. It won’t be long until Ava realizes that she’s been in bed with a monster! We’ll keep you posted as other GH news comes in. Stay tuned to the ABC soap and don’t forget to check CDL often for the latest General Hospital spoilers, updates and news.