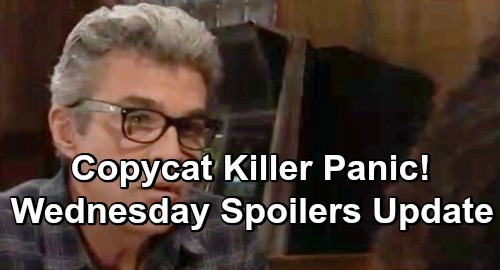 General Hospital (GH) spoilers for Wednesday, January 9, tease that Mac Scorpio (John J. York) will get updates on Jordan Ashford (Briana Nicole Henry) and Curtis Ashford’s (Donnell Turner) findings. They suspect that Ryan Chamberlain (Jon Lindstrom) may have an admirer out there who’s copying his work. When Mac hears about it, he’ll warn that catching a Ryan copycat could be awfully tricky.

However, catching the real thing will be even harder. The cops don’t even know Ryan is still alive, so they’re at a definite disadvantage here. Jordan will also bring Margaux Dawson (Elizabeth Hendrickson) in the loop on their latest discovery. The murderer’s victims were missing their licenses and so were Ryan’s victims during his original killing spree.

Of course, the cops didn’t notice that way back then. That’s why Jordan is so perplexed about all this, but a copycat will remain her current theory. Once Margaux wraps her head around the news, she’ll spill some info to Lulu Falconeri (Emme Rylan). Margaux will tell Lulu it’s off the record, but she’ll at least throw this investigative journalist a bone.

Sonny Corinthos (Maurice Benard) will also take a moment to catch up with Lulu. He may feel like he should see how she’s holding up without Dante Falconeri (Dominic Zamprogna) around. Lulu’s doing OK, but she’s certainly missing her husband. Perhaps throwing herself into work even more will help combat loneliness.

Other General Hospital spoilers say Laura Collins (Genie Francis) won’t have anything to hide. She’ll let Sonny know she’s an open book, so this may be about her honest campaign and mayoral plans. Laura just wants to give PC residents someone they can trust and rely on for change, so she’ll hope she gets the chance.

Over with Olivia Quartermaine (Lisa LoCicero), she’ll fret about Ned Quartermaine’s (Wally Kurth) safety in more ways than one. Olivia won’t want the killer potentially targeting Ned over his political career. She won’t be so sure Ned’s job is safe either, but he’ll insist that it’s in the hands of the people now. Whether Ned wins or loses, he’ll know that he did everything he could.

GH fans will see Sam McCall (Kelly Monaco) chat with Carly Corinthos (Laura Wright), too. They’ll discuss Josslyn Jacks’ (Eden McCoy) sorrow over Oscar Nero’s (Garren Stitt) tumor and how her instincts always tell her to fight. Carly will just hope Joss can see that this isn’t her call to make. Oscar shouldn’t have to chase more failed cures when he could be enjoying what little time he has left.

Luckily, Joss appears to get the picture now. She assured Oscar they would live in the moment on Tuesday, so maybe they’ll keep up that trend. As for Cameron Webber (William Lipton), he’ll face the judge’s ruling after Alexis Davis’ (Nancy Lee Grahn) gives her all. Alexis will mention the complex situation and suggest Cam’s not a bad kid, but only Judge Carson can decide his punishment.

Finally, General Hospital spoilers say Drew Cain (Billy Miller) and Sam will exchange favors. Drew’s main concern is Oscar and Sam’s focused on Shiloh (Coby Ryan McLaughlin), so they’ll try to come through for each other somehow. We’ll keep you posted as other GH details emerge. Stick with the ABC soap and don’t forget to check CDL often for the latest General Hospital spoilers, updates and news.