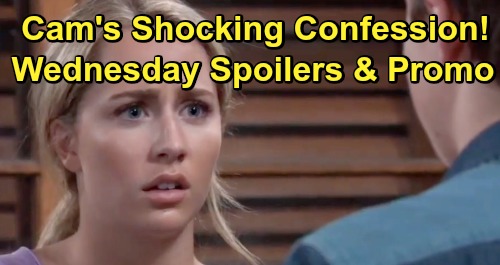 General Hospital (GH) spoilers for Wednesday, July 24, tease that Jasper “Jax” Jacks (Ingo Rademacher) will make an intriguing offer. He’ll want to take Nina Reeves (Cynthia Watros) and Valentin Cassadine (James Patrick Stuart) out to dinner, so he’ll do his best to talk Nina into it. What could possibly go wrong?

Putting Valentin and Jax at the same table seems like a disaster waiting to happen, but we’ll see if Jax can get Nina on board. That would just leave Nina to convince Valentin! In the meantime, Cameron Webber (William Lipton) will stun Josslyn Jacks (Eden McCoy) with an admission. He’ll confess that he’s the one who cut off the locks from the footbridge and offer a sincere apology.

Josslyn was devastated when she realized the lock she placed there with Oscar Nero Quartermaine (Garren Stitt) was gone. She’ll be even more upset when she realizes Cam’s to blame, but this is about more than just a lock. Josslyn is really struggling with the loss of Oscar himself, so she should calm down with Dev Cerci’s (Ashton Arbab) continued support. They shared a heartfelt moment out on the footbridge, so the tension’s starting to lift.

Over with Harrison Chase (Josh Swickard), he’ll grow frustrated with his brother. Hamilton Finn (Michael Easton) isn’t great at being open with most people, but Chase will feel like things should be different between them. He thought they were going to try and build a real relationship, but he’ll now think they’ve managed to take a step backward.

However, Finn cares about Chase and will fix this sooner or later. Perhaps Finn will share some painful details regarding his past with Hayden Barnes (Rebecca Budig) and get their brotherly bond back on track. Next, Michael Corinthos (Chad Duell) will have a chat with Willow Tait (Katelyn MacMullen). The topic of loss will come up, which will lead Willow to insist Michael’s was much deeper than hers.

Michael definitely had a hard time dealing with his initial grief over losing Jonah Corinthos. Now that what would’ve been Jonah’s first birthday is coming up, another wave of grief will wash over him. Willow will offer support, so Michael will undoubtedly return the favor down the road. GH fans know Jonah is alive and well, but the real Wiley Cooper-Jones died his very first night home from the hospital.

Michael will also share his feelings with Jason Morgan (Steve Burton) on Wednesday. Carly Corinthos (Laura Wright) will do the same, so Jason will be serving as a confidant all over the place. General Hospital spoilers say Jason will suspect there’s something Carly isn’t telling him about the baby. It looks like Carly will open up about the doctor’s spina bifida fears and the further testing that will determine the severity soon.

Robert may worry that Valentin will somehow use this to gain the upper hand when it comes to custody. He’ll warn that Charlotte’s freedom is going to be temporary, so he may fear Valentin could argue that his home is the truly stable one. Valentin always has a few tricks up his sleeve, so he could make some plays for full custody again.