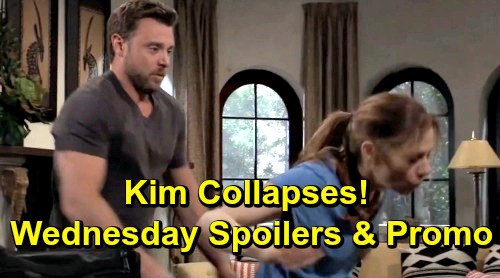 General Hospital (GH) spoilers for Wednesday, June 12, tease that Josslyn Jacks (Eden McCoy) will have a rough day. She’ll be missing Oscar Nero Quartermaine (Garren Stitt) even more than usual, so she’ll struggle to put one foot in front of the other. Fortunately, Jossly has plenty of people in her corner. When Maxie Jones (Kirsten Storms) sees that Joss is having a hard time, she’ll offer to help.

Maxie won’t want to be pushy – as if she could be anything but! However, Maxie will definitely want Josslyn to know she can talk to her. If there’s something Josslyn needs to get off her chest, let’s hope she’ll take Maxie up on the offer.

Other General Hospital spoilers say Jasper “Jax” Jacks (Ingo Rademacher), Nina Reeves (Michelle Stafford) and Ava Jerome (Maura West) will have a meeting. Unfortunately, it’ll be a tense one. Jax won’t approve of Nina’s plan to put Ava on the September issue’s cover. She may be a victim in Ryan Chamberlain’s (Jon Lindstrom) case, but Jax won’t think that excuses her history.

There’ll undoubtedly be some underlying resentment due to Jax’s bond with Carly Corinthos (Laura Wright). The bad blood over Morgan Corinthos’ (Bryan Craig) death should be a problem here. Jax will bring up other offenses that could haunt Ava in this story, too. He’ll wonder how she intends to answer questions about her own sometimes lethal past.

GH fans can expect Ava to bail on a project in Wednesday’s new GH episode, June 12. It sounds like Ava will wash her hands of this whole thing. After all, Nina came to her – not the other way around! Ava may suggest Nina will have to find another cover girl since Jax clearly can’t get behind her choice.

Elsewhere, Jordan Ashford (Briana Nicole Henry) will battle confusion. She’ll be up wheeling around her IV bag as she angrily demands to know what’s going on. Dr. Kevin Collins (Jon Lindstrom), Curtis Ashford (Donnell Turner) and Stella Henry (Vernee Watson) will all be there to face questions. It’s clear that an elaborate plot to secure Ryan’s kidney went down, so Jordan’s suspicions are revving up.

In Pentonville, Ryan will awaken in the infirmary and demand answers as well. Dr. Hamilton Finn (Michael Easton) will be there to provide them along with Valerie Spencer (Brytni Sarpy). Ryan will learn where he is along with the fact that he’s down a kidney. He may be outraged, but it certainly serves him right.

Ryan swapped places with Kevin and locked him in Ferncliff for months. This apparent switch is payback and saved Jordan’s life, so it’s a win all around. Meanwhile, Drew Cain (Billy Miller) will still be on his Mt. Kilimanjaro trip with Dr. Kim Nero (Tamara Braun). She’ll look disoriented in her hotel room as she admits she’s a little bit out of it.

Suddenly, Kim will collapse into Drew’s arms and leave him truly concerned. He may think Kim needs to get checked out at a hospital as a precaution, but she’ll probably refuse. Kim admitted she hasn’t really been sleeping, so maybe the fatigue is catching up with her.

Then again, Kim might’ve taken some pills or resorted to some other destructive coping strategy. General Hospital spoilers have been hinting that Kim will head down a dark path, so that could be how she goes. Regardless, Drew will be there to hopefully bring a glimmer of light back to Kim – or at least help her through one more day without Oscar.

It looks like some gripping scenes are on the way. We’ll give you updates as other GH news comes in. Stay tuned to the ABC soap and don’t forget to check CDL often for the latest General Hospital spoilers, updates and news.