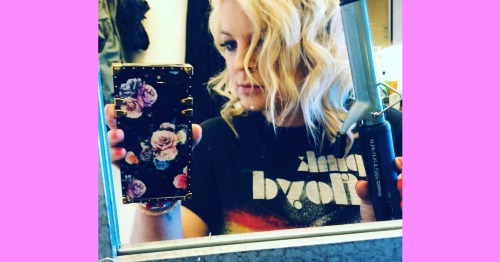 General Hospital (GH) spoilers reveal that one ABC soap star decided to pass along an exciting tip to her fans. GH viewers know Kirsten Storms as Maxie Jones in Port Charles. Maxie’s hair always looks fabulous, but Storms made an admission about some real-life hair struggles on Instagram. GH’s hair stylists get the job done, but Storms argued she’s “not the best” at doing her hair on her own.

Fortunately, Storms recently found a useful tool that does the trick. She’s got a new curling iron that’s really helping her out, so she shared the news anyone who might be having similar hair issues. It’s nice of Storms to stay connected with fans and offer a look as her latest hairdo in the process.

“Ok guys – you know when I find a good deal I like to share that information,” Storms said. “THIS IS NOT AN AD. Currently obsessed with this @conair infinitipro 1” curling iron. It’s available on @amazon for $30 and it’s legit amazing.” Storms went on to describe some of things she likes about this particular curling iron – like how easily it twists and its user-friendly touchscreen temp setting.

The General Hospital actress also posted a pic of the finished product, which looks fantastic. Storms has obviously found something that works for her. She admitted she’s got a new curling wand to try out next, which requires a heat glove. Storms suggested she’d have to watch out and try not to burn her head, but we’re sure she’s got it covered!

Storms also linked her tip to Twitter and got some grateful replies. One fan gushed, “Your hair looks amazing! Now I have to look at this and get one for myself Thanks for sharing.” Another GH viewer said, “I desperately need a new curling iron! The recommendation is appreciated.” “You look beautiful no matter what you do #Jealous,” one more fan insisted.

It’s always fun when soap stars offer a little glimpse into their lives, and Storms does it frequently. We’ll look forward to more beauty tips and tricks from her! As for what’s next in Port Charles, General Hospital spoilers say Maxie’s love for Peter August (Wes Ramsey) will grow along with the possibility for trouble. The mission to bring Dante Falconeri (Dominic Zamprogna) home will bring some big shockers.

It sounds like some terrific drama’s brewing, so stay tuned. We’ll give you updates as other GH details emerge. Stick with the ABC soap and don’t forget to check CDL often for the latest General Hospital spoilers, updates and news.

Ok guys – you know when I find a good deal I like to share that information. THIS IS NOT AN AD. Currently obsessed with this @conair infinitipro 1” curling iron. It’s available on @amazon for $30 and it’s legit amazing. The cord turns so it’s easy to twist the iron when you’re doing your hair & there is a touch screen for the temp setting – it even tells you what type of hair the setting you selected is for. 🙌🏼 Extremely user friendly (I am not the best at doing my hair) and a great price! (Side note: I just bought the @langehair 1” curling wand yesterday and I’ll be trying that next 🤞🏼Hope I don’t burn my head – you have to use a heat glove with that one 🤦🏼‍♀️). #conairinfinitipro #conair