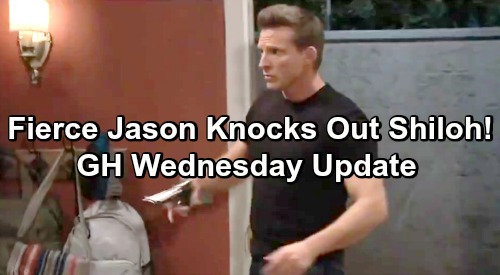 General Hospital (GH) spoilers for Wednesday, May 8, tease that Sam McCall (Kelly Monaco) will pledge her unwavering loyalty to Shiloh Archer (Coby Ryan McLaughlin). She’ll make it clear that nothing can shake her commitment, which should leave Shiloh pleased. Sam will move forward with her initiation, but an armed Jason Morgan (Steve Burton) will show up in the nick of time.

GH fans can expect Jason to thwart Shiloh’s tattoo plans. He’ll bash him in the head and knock Shiloh out in the process. Sam may fear that Jason’s blowing her cover, but he’ll insist it doesn’t matter anymore. Jason will fill Sam in on Kristina Corinthos-Davis’ (Lexi Ainsworth) turnaround in therapy. He’ll contend that Sam doesn’t have to go through with this, so they’ll get out of there immediately.

Of course, Shiloh won’t be happy when he realizes he’s been duped. Sam will worry about the consequences, but they can handle those later. For now, Sam should just be grateful she didn’t have to take things any further. She’ll be free from the charade and that’ll be bring relief.

Willow lied about having a miscarriage, but what if Harmony didn’t really buy it? Even if she did, Harmony could still mention the pregnancy to Shiloh and stir up trouble. Willow will worry that Harmony’s going to use this as leverage. She’ll feel like if she doesn’t return to DoD, Harmony will tell Shiloh about her son. When Chase realizes that’s Willow’s fear, she should confirm it.

While Chase reassures Willow, Valerie Spencer (Paulina Bugembe) will push Brad Cooper (Parry Shen) to keep his distance from Dawn of Day. She won’t think Brad should have anything to do with Shiloh or his followers. It seems Lucas Jones (Ryan Carnes) could have DoD doubts, too. He’ll ask Julian Jerome (William deVry) for assistance, so this may involve pulling Brad away from the kooky community.

Next, Curtis Ashford (Donnell Turner) will let Drew Cain (Billy Miller) know he cares. He’ll get that Drew’s going through an incredibly painful ordeal, but he’ll offer to help in any way he can. Dr. Kim Nero (Tamara Braun) will need some help on Wednesday as well. She’ll phone someone in hopes of talking about Oscar Nero (Garren Stitt), so we’ve got a few options to consider.

Shiloh is one person Kim might reach out to. General Hospital spoilers say Kim won’t deal with her grief in the healthiest way. She’ll resort to some risky coping strategies, so getting into DoD might be one. Since Oscar was part of that community, it’d be easy for Kim to fall right in.

If GH wants to hold off on that storyline or take another direction, Kim might reach out to Dr. Neil Byrne (Joe Flanigan). She could also turn to another professional or at least someone trustworthy. Kim will be in bad shape as she makes this call, so let’s hope the person she gets in touch with can offer comfort.

Across town, Alexis Davis (Nancy Lee Grahn) will get some guidance from Neil – free of charge this time. It won’t be a formal session, but he’ll advise Alexis to try doing without a particular crutch. It doesn’t look like it’ll be alcohol, but it’ll still be some source of negativity in Alexis’ life. She should appreciate Neil’s efforts, so their bond will deepen in Wednesday’s episode.

Other General Hospital spoilers say Jasper “Jax” Jacks (Ingo Rademacher) will clash with Sonny Corinthos (Maurice Benard). They’ll rub each other the wrong way, but Carly Corinthos (Laura Wright) will thankfully keep the peace. She’ll interrupt their tense conversation and make sure everyone stays calm for the most part.

It sounds like some fantastic scenes are coming up. We’ll give you updates as other GH news emerges. Stick with the ABC soap and don’t forget to check CDL often for the latest General Hospital spoilers, updates and news.