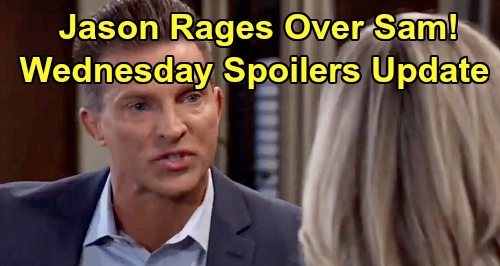 General Hospital (GH) spoilers update for Wednesday, November 20, teases that the excitement’s about to rev up. We should point out that impeachment hearings coverage could lead to a preemption on Wednesday. If so, GH will announce whether the episode will be pushed back to a later date. We just wanted you to be in the loop! Now we can address all the chaos ahead in Port Charles.

For starters, let’s talk about Brook Lynn Ashton (Amanda Setton). She made a stop at Charlie’s Pub before heading over to the Quartermaine mansion. That’s where Sonny Corinthos (Maurice Benard) happens to be right now, so he’ll catch up with Brook Lynn on Wednesday. She’ll wonder if Sonny’s still driving the ladies wild and score a smile in return.

Ned Ashton (Wally Kurth) will wonder what brings Brook Lynn back to PC, but she may argue that she wanted to see her loved ones. She might urge Ned to stop acting so suspicious, but there’ll be a good reason for his concerns! Brook Lynn is clearly hiding something, but Ned probably won’t pry anything out of her just yet. Olivia Quartermaine (Lisa LoCicero) will also be on hand to ponder Brook Lynn’s arrival. You can bet she’ll be just as stumped as Ned is about Brook Lynn’s sudden homecoming.

Other General Hospital spoilers say Jason Morgan (Steve Burton) will fly into a rage. He’ll be beside himself as he explains the trial outcome to Carly Corinthos (Laura Wright). Jason kept calm in the courtroom for Sam McCall’s (Kelly Monaco) sake, but he’ll hold nothing back in front of Carly. He’ll wish he’d killed Shiloh Archer (Coby Ryan McLaughlin) from the get-go and prevented Sam’s nightmare.

Carly will encourage Jason to settle down and focus on the battle ahead. She knows Jason well enough to realize he’s surely got a backup plan. That’s where Damian Spinelli (Bradford Anderson) comes in. General Hospital spoilers say Jason will get in touch with Spinelli before long, so they’ll come together for a desperate team effort.

At Wyndemere, Charlotte Cassadine (Scarlett Fernandez) will be alarmed by a familiar face. She’ll spot the mystery man from the pier and wonder what he’s doing in her living room. Of course, GH fans know that mystery man is Nikolas Cassadine (Marcus Coloma). Charlotte will have no idea Spencer Cassadine’s (Nicolas Bechtel) presumed dead father is standing right in front of her – and Nik would undoubtedly like to keep it that way. It’ll be interesting to see how Nikolas wiggle out of this jam.

At Shadybrook, Valentin Cassadine (James Patrick Stuart) will arrive to see Ava Jerome (Maura West), but it seems the visit will be a contentious one. Valentin will point out that Ava has Helena Cassadine’s (Constance Towers) portrait. He may want to buy it back, but Ava could use this opportunity to push Valentin’s buttons. She may remind Valentin that he was eager to throw it away before, so why should she sell him this fine painting now?

Valentin might get nasty and suggest he’ll do whatever it takes to get his hands on it. He’s not above throwing threats around, and he won’t care that Ava’s been institutionalized. Valentin knows there’s more to this portrait than meets the eye, so he’s eager to get his hands on it before it’s too late.

Next, Jasper “Jax” Jacks (Ingo Rademacher) will decline Nina Reeves’ (Cynthia Watros) wedding invitation. It’s kind of ridiculous for Nina to gather everyone up for another one anyway! Nevertheless, Nina may act offended and wonder why Jax won’t show his support. Jax may suggest it’s because he can’t give it. He might argue that he can’t wrap his head around Nina’s decision to reunite with Valentin.

General Hospital spoilers say Jax will wonder what’s up with Nina. He may point out that Nina could do far better than a liar like her current fiancé. Nina will eventually confide in Jax, so she might admit that she’s manipulating her husband-to-be. She may suggest she’s setting Valentin up for a huge fall – because that’s certainly what she seems to be doing.

Then again, it’s possible Nina will keep that tidbit to herself a bit longer. Regardless, we’ll see if Nina can stick to her apparent takedown plan. Across town, General Hospital spoilers say Hayden Barnes (Rebecca Budig) will chat with Anna Devane (Finola Hughes). They’ll have an uncomfortable conversation at the Metro Court, which will lead to some talk about “Fanna’s” nuptials.

Hayden will wonder if that wedding’s still on, so Anna should confirm that it is. Anna and Hamilton Finn (Michael Easton) haven’t locked in any details, but they do plan on getting married. While Hayden continues to pine for Finn, Harrison Chase (Josh Swickard) will feel snubbed. He’ll be hurt that his brother failed to mention his new daughter, Violet Barnes (Jophielle Love).

However, Chase needs to be fair here. Finn had to process this shocker and get to know Violet before he started spreading the word. It was overwhelming and perhaps something that Finn just needed to work through on his own. Let’s hope Finn can smooth things over quickly and get his bond with Chase back on track. We’ll give you updates as other GH news comes in. Stay tuned to the ABC soap and don’t forget to check CDL often for the latest General Hospital spoilers, updates and news.