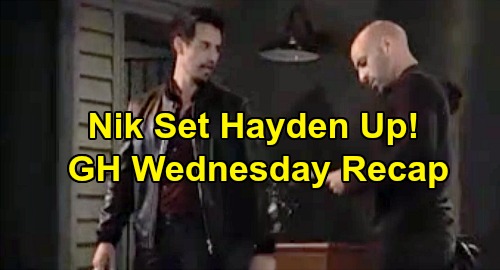 General Hospital (GH) spoilers review for Wednesday, November 27, reveal that Hayden Barnes (Rebecca Budig) was in the process of getting attacked by some guy when Nikolas Cassadine (Marcus Coloma) intervened and physically fought the guy off. Afterwards, Hayden was shaken and assumed that Valentin Cassadine (James Patrick Stuart) had arranged for the attack. Nikolas stressed that Hayden needed to leave Port Charles and leave her daughter Violet Barnes (Jophielle Love) behind.

Hayden stressed about having to leave her daughter, but Nikolas assured her that she might only need to be gone for a few weeks, and that it was the only way to keep Violet safe from Valentin. Once Hayden was gone to go say her goodbyes to Violet and prepare to leave town, the guy who attacked Hayden came out of the shadows and Nikolas paid him – so it was all a setup by Nikolas to get rid of Hayden, probably due to the fact that she was going to spill crucial details about Helena Cassadine’s (Constance Towers) portrait to Valentin.

Hayden then showed up at Anna Devane (Finola Hughes) and Hamilton Finn’s (Michael Easton) home, ostensibly to bring some additional things of Violet’s for her sleepover there. However, she was really there to see Violet one last time before she left Port Charles and disappeared. Hayden spent a few moments alone with Violet, telling her that even when she’s not here, she loves her very much. After a final hug, Hayden tucked an envelope into a little purse of Violet’s and left crying.

Meanwhile, Martin Grey (Michael E. Knight) spoke with Valentin, who tried to process the recording that he just heard of Jasper “Jax” Jacks (Ingo Rademacher) and Laura Collins (Genie Francis) saying that there was a codicil to Mikkos Cassadine’s (John Colicos) will. Valentin wondered aloud why his father would have changed his will and deduced that Helena must have pressured him into it.

Valentin also told Martin that “diversification” was key right now, and that the “ancillary project” that he had discussed with Martin had just become more important. Exactly what this ancillary project is remains to be seen, but it’s likely that Valentin was talking about hiding assets in the event that his possession of the Cassadine fortune becomes an issue down the line.

Martin and Valentin also discussed Ava Jerome (Maura West), but Valentin didn’t think it was worth it for Martin to try to talk with her, since she had a psychotic break and had imagined seeing Nikolas. Valentin tried to put the pieces together but didn’t suspect that Nikolas could be alive and instead instructed Martin to put eyes on Spencer Cassadine (Nicolas Bechtel) at all times so that he’d have leverage if needed.

Finally, Willow Tait (Katelyn MacMullen) and Harrison Chase (Josh Swickard) joined Sasha Gilmore (Sofia Mattsson) and Michael Corinthos (Chad Duell) at The Floating Rib. Willow ordered club soda and started feeling nauseated at the sight of food, and a bit later in the ladies’ room, Sasha inquired if Willow could be pregnant. Willow at first denied it, but then revealed that it was possible.

Sasha offered some comfort and suggested that she tell Chase about the possibility. Willow seemed skittish about the whole thing and stated that she wasn’t sure what she even wanted, but Sasha said that she should just be honest and that she and Chase could figure it out together.