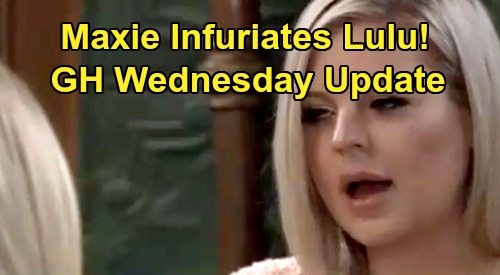 General Hospital (GH) spoilers update for Wednesday, October 16, teases that Alexis Davis (Nancy Lee Grahn) will have an interesting reaction in Charlie’s Pub. She’ll alert someone to a woman who just walked in and seem alarmed about it. Of course, it could be a bit of a joke. Kendra Lennon (Michelle Argyris) is Alexis’ personal trainer, and she’s definitely been making Alexis feel the burn.

Despite Alexis’ approval of the results, she’s groaned about Kendra trying to kill her. Little does Alexis know Kendra is plotting revenge, which could indeed be quite deadly. Then again, Hamilton Finn (Michael Easton) suspects his child might still be alive, which he revealed to Alexis. Hayden Barnes’ (Rebecca Budig) arrival could bring an awkward reaction from Alexis, too.

Even if it’s someone else who makes Alexis uneasy, she’ll find a way to handle the drama. Over with Lulu Spencer (Emme Rylan) and Maxie Jones (Kirsten Storms), they’ll bicker once again. Lulu will be aghast when Maxie suggests she wouldn’t have told Nina Reeves (Cynthia Watros) the truth. Never mind the fact that Maxie tried to expose Sasha Gilmore (Sofia Mattsson) months ago!

Maxie was adamant that Nina needed to know the real story, but another rigged DNA test delayed the inevitable. Even so, Lulu will think it’s unfair for Maxie to criticize her. She’ll want some credit for finally bringing Nina in the loop. Alas, Nina is letting Valentin Cassadine (James Patrick Stuart) pull the wool over her eyes for the umpteenth time. She believes Valentin had nothing to do with Sasha’s plot.

On Wednesday’s GH episode, Valentin will find himself in a jam. He’ll want to keep Sasha out of trouble as best he can, but that’ll leave Nina raising an eyebrow. She’ll wonder why Valentin wouldn’t want Sasha punished. It’s just not Valentin’s style to let the guilty go free – not when they’ve targeted people he cares about.

If Valentin were genuinely innocent, you can bet he’d be going after Sasha with everything he’s got. Since Valentin’s the one who roped Sasha into it, he’ll feel obligated to help her. After all, Sasha did Valentin a massive favor by taking the blame. This will be tricky for Valentin to navigate, but he should convince Nina he’s being merciful, not apathetic.

Since Brad’s set to attend Nelle Benson’s (Chloe Lanier) parole hearing, that could also perplex Lucas. He’ll just wish he could get inside Brad’s head and get to the bottom of things. Michael Corinthos (Chad Duell) will want answers as well. He’ll get agitated over Brad’s efforts to help Nelle earn her freedom, but Nelle will think she’s entitled to have a friend in her corner.

Nelle will hint that she has to be honest with Michael, but she won’t divulge anything major. It’d destroy her chance at getting out on parole and add to Nelle’s charges instead. It seems likely Nelle will just make her hormonal changes spiel and argue that she was under severe stress. Nelle will play the victim and contend that she deserves a shot at life on the outside.

Michael will be enraged over Brad’s statement on Nelle’s behalf. He’ll end up lunging at Brad, which will bring Nelle’s intervention. General Hospital spoilers say Nelle will pretend to play peacemaker, but you can bet she’ll love every second of the chaos she causes.

It looks like some fantastic scenes are on the way. We’ll give you updates as other GH news comes in. Stay tuned to the ABC soap and don’t forget to check CDL often for the latest General Hospital spoilers, updates and news.