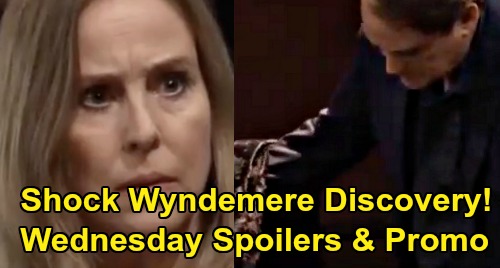 General Hospital (GH) spoilers for Wednesday, October 2, tease that the night before Valentin Cassadine’s (James Patrick Stuart) and Nina Reeves’ (Cynthia Watros) wedding will have its moments. First off, it looks like Peter August (Wes Ramsey) will express some frustration to Maxie Jones (Kirsten Storms) about his official duties as Valentin’s best man. He’ll be in charge of throwing Valentin’s bachelor party, but since Valentin has no real friends, it will be a bit of a challenge.

Of course, that might be wishful thinking on Valentin’s part. He’s been suspicious lately of what’s been going on between Sasha Gilmore (Sofia Mattsson) and Michael Corinthos (Chad Duell), and he’s right to be concerned, since Sasha recently told Michael that she wasn’t really Nina’s daughter. She and Michael have decided that the truth needs to wait to come out until after Cassandra Pierce’s (Jessica Tuck) trial, so that Sasha’s credibility isn’t called into question.

And that means that Sasha’s going to let Nina go ahead and marry Valentin before she spills the truth about being in cahoots with him to deceive her about being her daughter. Speaking of Sasha, she’ll tell someone – most likely Nina – that no one is going to spoil this night for her. It seems that she’ll attend a spa night with Nina, Maxie, Lulu Spencer (Emme Rylan), and Liesl Obrecht (Kathleen Gati). It looks like they’ll all have a great time. Nina’s shown in Wednesday’s GH previews giving Maxie a big hug, so it looks like the girls’ night will go well.

While all of the evening festivities are going on with the wedding parties, Laura Collins (Genie Francis) and Kevin Collins (Jon Lindstrom) will be at Wyndemere, staying the night with Charlotte Cassadine (Scarlett Fernandez). As GH viewers know, Laura’s got big plans to search the place for the codicil to Mikkos Cassadine’s (John Colicos) will, but since she’ll have Kevin in tow, she’ll need to be discreet.

General Hospital spoilers indicate that Kevin will sense that Laura has a hidden agenda while they’re at the mansion, and it looks like Kevin might get involved in the action. He’s shown in Wednesday’s previews fiddling with some object while Laura looks on, concerned. We’ll see if he ends up getting the truth out of Laura about the search she’s involved in.

Finally, Willow Tait (Katelyn MacMullen) will spend some time out and about with Harrison Chase (Josh Swickard). They’ll enjoy some time together at The Floating Rib, and Willow will playfully tell Chase to go ahead and surprise her. She’ll have her eyes closed, so it looks like Chase may have something fun in store for her.