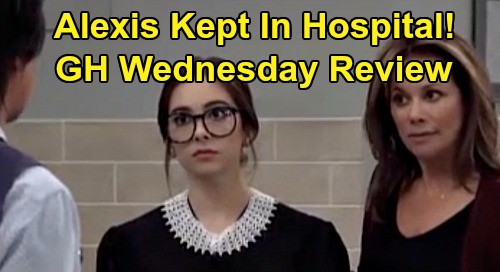 Valentin also overheard Laura Collins (Genie Francis) and Jasper “Jax” Jacks (Ingo Rademacher) talking about the portrait of Helena Cassadine (Constance Towers). They had been talking about how the codicil might actually be in the painting, but Valentin didn’t hear that part. He did, however, needle Laura about why she was so interested in the portrait. Laura covered and said that Spencer Cassadine (Nicolas Bechtel) wanted it, but Valentin didn’t buy it.

Later, Valentin was remarking to Nina about how the portrait might be a lot more valuable than he realized, and he happened to be within earshot of Ava Jerome (Maura West). Ava perked right up when she heard this. Now Ava will probably realize that she’s in possession of something that’s coveted and potentially worth quite a bit to the highest bidder. We’ll see what Ava decides to do – who knows, she could decide to try to decode the symbols in the painting herself.

Meanwhile, Cameron Webber (William Lipton) spent a little time with Elizabeth Baldwin (Rebecca Herbst) before heading over to the Corinthos compound with Trina Robinson (Sydney Mikayla). Cam and Trina met up there with Josslyn Jacks (Eden McCoy) to get ready for the Halloween party aboard The Haunted Star.

Cam noticed Jason Morgan (Steve Burton) out on the patio and decided to go talk with him. Cam told Jason that he owed him an apology for what he said in anger at Franco Baldwin’s (Roger Howarth) hearing. Jason was understanding, and Cam admitted that he believed that his own testimony could have been better, and that if he had been clearer like Jason was, maybe the judge’s decision would have been different.

Jason promptly set Cam straight and let him know that all that mattered to the judge was what Kevin Collins (Jon Lindstrom) said, and that Cam had no reason to feel guilty about anything. Poor Cam still felt terribly, though, and Jason kindly told him that he now has two choices – to be angry all the time or learn live with the ruling and help the people he loves.

Cam then went inside the house and spied the liquor decanters sitting in the living room. He quietly poured some of the booze into his soda bottle. Later, Cam, Trina, and Joss were dressed in costume and waiting for Dev Cerci (Ashton Arbab) to finish getting ready upstairs. Cam remarked that he didn’t think he was going to have a problem letting things go and having a good evening.

Of course, this probably won’t end well, considering that Cam will be in close proximity with his friends all night, and they’ll probably be able to tell that he’s been drinking. Plus, he’ll be at a high school function, so if he gets caught, there will be consequences. Also, we can’t forget that Cam is still on probation, so drinking is a big no-no. And then there’s the larger issue of his decision to use a substance to cope, which is a big red flag for future problems.

Finally, Molly Lansing-Davis (Haley Pullos) arrived at Alexis Davis’ (Nancy Lee Grahn) house and found her mother passed out on the sofa. She was difficult to wake, and naturally Molly suspected that Alexis had been drinking. Of course, GH viewers know that Alexis’ symptoms stem from the poisoned nutritional supplement she’s been consuming.

Well, Molly was quite worried about Alexis and dragged her to the hospital, where Hamilton Finn (Michael Easton) checked her over and got her started on IV fluids. She ran down all her symptoms for Finn – fatigue, nausea, vomiting, not being able to wake up easily, and then Finn noticed a strange rash on her hand. Finn ended up insisting that she stay overnight for observation, so they could find out what was wrong with her.

One would like to think that Finn would be able to run a quick blood test and find traces of poison in Alexis’ blood, but it may not be that simple, depending on exactly what Kendra Lennon (Michelle Argyris) has poisoned her with. Given upcoming GH spoilers, it looks like Alexis will simply think she’s got the flu, so perhaps Kendra has done her research and is poisoning Alexis with a hard-to-detect poison.