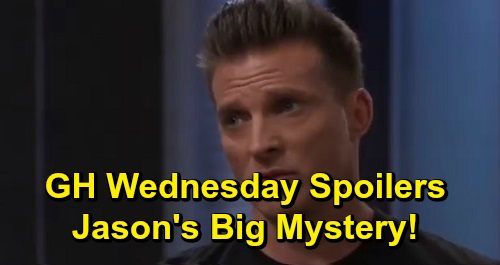 General Hospital (GH) spoilers for Wednesday, September 18, tease that Dustin Phillips (Mark Lawson) will make a phone call. It looks like he’ll ask Lulu Spencer (Emme Rylan) if she wants to get together this weekend – perhaps in hopes of shaking off their awkward moments on The Haunted Star. It’s never a good thing when your mother walks in on a hookup, but Lulu and Dustin shouldn’t let one mortifying incident hold them back.

Over with Maxie Jones (Kirsten Storms), she’ll want all the details of Dustin and Lulu’s time together. Maxie will push Lulu to tell her everything, so Lulu should spill the part about Laura Webber (Genie Francis) and Curtis Ashford (Donnell Turner) walking in on them. It was unfortunate, but Maxie may be somewhat amused. Regardless, she’ll be pleased that Lulu’s getting along with the new hunk in her life.

Other General Hospital spoilers say Cameron Webber (William Lipton) will need a pep talk. He’ll be down in the dumps over the Franco Baldwin (Roger Howarth) situation. Cameron’s family has been torn apart, so he’ll think back to when he didn’t support Franco and Elizabeth Baldwin’s (Rebecca Herbst) relationship. He’ll be somber as he tells Josslyn Jacks (Eden McCoy) he finally got what he wanted.

Cam wasn’t the biggest Franco fan for a while, so he may feel like this is punishment. He’ll suggest that he wanted Franco out of the picture and now that wish has come true. However, Josslyn will assure Cameron that this is Shiloh Archer’s (Coby Ryan McLaughlin) fault. Cam just got caught up in the mess and never wanted to hurt his mom like this.

Kim Nero (Tamara Braun) didn’t want to hurt Liz either, but she made the conscious decision to in Tuesday’s episode. GH viewers know Kim slept with Franco, and it probably won’t take Liz long to figure that out. Franco’s about to leave Kim’s apartment, where Kim happens to be wearing a slinky robe. Liz may take one look at the duo and know exactly what they were doing just a few minutes prior.

General Hospital spoilers say Liz will confront Kim on Wednesday. She’ll seem upset and agitated as she insists they need to talk, but Kim won’t think Liz wants to do this right now. Of course, delaying this conversation won’t change anything. The fact is Kim slept with Liz’s husband and she deserves an earful for that. Not only did Kim betray Liz, she took advantage of Franco since he’s not in control of his own mind.

Down by the docks, Peter August (Wes Ramsey) will have a shady meeting with someone. They’ll discuss a plan, which Peter will deem too risky. He’ll decide they’ll have to find another way, so is this about Andre Maddox (Anthony Montgomery) or Franco Baldwin (Roger Howarth)?

Peter may determine that trying to murder Andre or Franco would mean taking too big of a gamble. He’ll have to be sneaky if he hopes to prevent this memory reversal procedure. Next, Shiloh Archer (Coby Ryan McLaughlin) will call somebody from Pentonville. He’ll insist he’s got important information for this person, so it’ll be interesting to see what plot he’s cooking up this time.

Finally, Jason Morgan (Steve Burton) and Sonny Corinthos (Maurice Benard) will ponder a puzzle. They won’t know what it means, but Jason will promise to get some answers. If there’s a problem in Port Charles, you can always count on Jason to solve it!