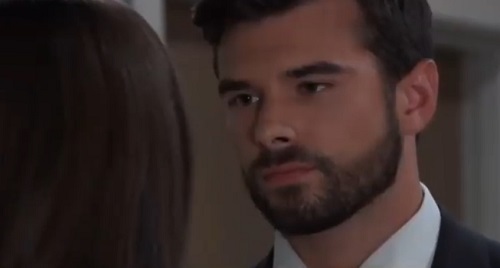 General Hospital (GH) spoilers update for Wednesday, September 26, teases that things will spiral out of control on The Haunted Star. Shiloh Archer (Coby Ryan McLaughlin) implied that the end might be near for Sam McCall (Kelly Monaco), so she’ll definitely fear the worst. Sam will get thrown to the ground by Shiloh at one point, but it won’t be long until Jason Morgan (Steve Burton) rides to the rescue.

It’d be nice if Sam could save herself here, but it’s always fun to see Jason in hero mode, too. The important thing is Shiloh won’t win! Of course, there could be some other big showdowns along the way. Willow Tait (Katelyn MacMullen) will share a stunning suggestion with Harrison Chase (Josh Swickard) on Wednesday. She’ll think she’s got a good strategy to lure Shiloh out of hiding and get “Wiley Cooper-Jones” back.

However, Chase may be reluctant – especially if it involves a risky situation for Willow. He loves his girlfriend and won’t want her in Shiloh’s dangerous path. Chase himself could be headed for trouble since he’ll rush down to the docks. He’ll take a stretcher to GH later this week, so Shiloh could easily be on it. Will Chase shoot Shiloh or will someone else pull the trigger instead? Either way, it looks like Shiloh could end up fighting for his life.

Meanwhile, Bobbie Spencer (Jacklyn Zeman) will get reassurance from Carly Corinthos (Laura Wright). Since Bobbie’s been hospitalized, Carly will pop in to see her. She’ll insist Jason’s going to come through for them and bring “Wiley” home. Fortunately, “Wiley’s” already safe thanks to Sam. She talked Shiloh into letting “Wiley” and Dev Cerci (Ashton Arbab) go, so that’ll bring relief as word spreads.

Other General Hospital spoilers say Jasper “Jax” Jacks (Ingo Rademacher) will push Sonny Corinthos’ (Maurice Benard) buttons – perhaps just a little too hard! Sonny will decide he’s had enough on Wednesday. He’ll lash out at Jax and contend that what happens in his family is none of Jax’s business. That’s not exactly true since Josslyn Jacks (Eden McCoy) is Sonny’s stepdaughter, so Jax should fire back.

Over with Peter August (Wes Ramsey), he’ll earn some kind words from Laura Webber (Genie Francis). She’ll be grateful for something, so she’ll be sure to say so. It’ll continue this trend of Peter seeming like a great guy on the surface. In reality, Peter’s keeping plenty of dark secrets. One of those secrets just made its way into Maxie Jones’ (Kirsten Storms) hands. She found the receipt for Peter’s huge cash withdrawal, so you can bet she’ll have questions for her beau later.

Until then, let’s talk about Franco Baldwin’s (Roger Howarth) predicament. He’s restrained to a hospital bed due to Elizabeth Baldwin’s (Rebecca Herbst) plan, so he’ll remain upset about that. Franco will feel like his days are numbered because of this memory procedure. He’ll expect to either lose his Drew Cain (Billy Miller) memories or end up in a vegetative state, so he’ll have a pretty grim outlook.

Of course, Liz will just focus on the one outcome she’s looking for. She desperately wants Franco back, so she’ll count on the procedure to work. After Liz updates Cameron Webber (William Lipton), he’ll express concern about Franco becoming a vegetable. Cam won’t be certain the risk is worth it, so he’ll tell his troubles to Laura and get some guidance in return.