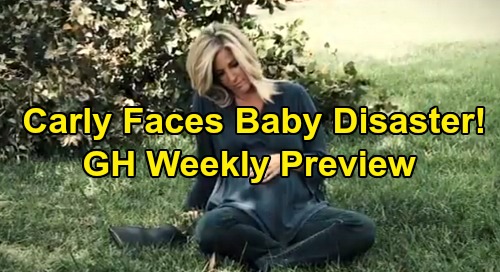 General Hospital (GH) spoilers preview promo video for the week of August 19 to August 23 indicate that Port Charles will be in an uproar as two families are in turmoil, facing disaster. To add to the drama Billy Miller’s (Drew Cain) final airdate is rapidly approaching lending an air of tragedy to the ABC soap.

Has Liz Lost Franco For Good?

General Hospital’s Franco Baldwin (Roger Howarth) has no memory of his life with his wife Elizabeth Webber (Rebecca Herbst) and her children but has plenty of Drew Cain’s (Billy Miller) and plans to use them. Shiloh Archer (Coby Ryan McLaughlin) is the “new” Drew’s target.

Shiloh thought giving Franco Drew’s memories would help him to access his money hidden in Afghanistan. However, Shiloh has erased the former serial killer’s memories and resurrected the man, known affectionately on social media as ‘FrankenDrew,’ who was bound to take him down for treason.

Will Franco make good on his threat and make Shiloh pay? Will Drew’s implanted memories be admissible in court against Shiloh? Will Shiloh go down for treason and his various other crimes including murder and kidnapping?

Liz fears she has lost her husband for good and searches for ways to try to restore his memories when there is no baseline flash drive to replace them. Scott Baldwin (Kin Shiner) grieves for the son he didn’t know he had until six years ago. Franco and Scott have become very close, and Scott doesn’t know how to handle his son, not recognizing him. Can Scott get through to Franco?

Cameron Webber (William Lipton) is beside himself over Franco’s problems, largely because he blames himself for Franco’s memory loss. Cameron thinks he should have run from Shiloh instead of letting himself be kidnapped. Will Cameron be the one that brings Franco back… or tries to take Shiloh out?

General Hospital spoilers tell us that Sonny Corinthos (Maurice Benard) and Carly Corinthos (Laura Wright) anxiously await news about their baby. Baby Corinthos has Spina Bifida, but Carly’s upcoming ultrasound should show them how bad the condition truly is.

Jasper Jacks (Ingo Rademacher) is there for Carly to lean on as well because he knows what Carly went through while carrying their daughter Josslyn Jacks (Eden McCoy). Will Jax’s support for Carly’s decision to carry the baby to term lead to CarJax getting too close for Sonny’s comfort?

Might Carly and Sonny get good news – that the baby be born with minimal damage caused by the Spina Bifida? General Hospital is heating up with both fear and the need for revenge. Will the residents of Port Charles get justice where this involves Shiloh? GH fans are worried that Franco might be stuck with Drew’s memories forever.

How these issues are resolved remains to be seen but the General Hospital preview promises a week full of unparalleled action and drama. Make sure to return to CDL for all of your General Hospital spoilers, updates and news!