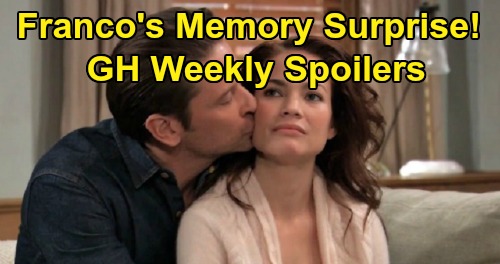 General Hospital (GH) spoilers for the week of December 9-13 tease that some big moments are coming up. For starters, Elizabeth Baldwin (Rebecca Herbst) will struggle to explain how grateful she is. It sounds like “Drew Cain’s” attempt to give Franco Baldwin (Roger Howarth) his life back will be a success.

However, Liz will have some questions for Franco soon after he awakens. Is there a chance some of “Drew’s” memories will remain? Will Franco at least recall everything that’s gone down during his time as “Drew”? General Hospital spoilers say Liz will hope for some answers and fans can expect some memory surprises after the procedure.

As for Peter August (Wes Ramsey), his new plot will be thwarted by Laura Webber (Genie Francis). She may do it inadvertently, but some sabotage will definitely go down. As for Anna Devane (Finola Hughes), alarm bells should go off thanks to Peter’s deception. Anna has good instincts and is able to read people pretty easily. It shouldn’t be hard for her to tell that Peter’s lying – and she’ll want to know why.

Other General Hospital spoilers say Jasper “Jax” Jacks (Ingo Rademacher) will put up with about all he can stand. Nikolas Cassadine (Marcus Coloma) just keeps making risky move after risky move. He’s bungled pretty everything he possibly could, so Jax will be downright sick of it!

As for Valentin, he’ll face serious concerns. Valentin will feel like things may not be quite as they seem, but what does that mean exactly? Will Valentin fear Nina Reeves (Cynthia Watros) isn’t all in on their reunion or could this involve Nik survival clues? Either way, Valentin should get nervous and take precautions.

Over with Lulu Spencer (Emme Rylan) and Olivia Quartermaine (Lisa LoCicero), they’ll find common ground. Olivia and Lulu will have a mutual reason to gripe, so they’ll probably commiserate over Brook Lynn Ashton’s (Amanda Setton) return home. Next, Nelle Benson (Chloe Lanier) will call up Martin Gray (Michael E. Knight). She’ll undoubtedly remind Martin of all the money that’s at stake and push him to move her freedom plan along.

Across town, Julian Jerome (William deVry) will battle more remorse just before Harrison Chase (Josh Swickard) makes a stunning discovery. Will that involve a hint about Julian’s guilt? Will Julian’s brake tampering be exposed or will GH hold off for a while? Regardless, Chase will be determined to find the truth.

Elsewhere, Carly Corinthos (Laura Wright) will get some alarming news. That could be about Lucas Jones (Ryan Carnes) if his recovery takes a turn for the worse. General Hospital spoilers say Dr. Griffin Munro (Matt Cohen) will be back soon to handle the case, but Lucas’ loved ones will still fret about him.

Later, Ava Jerome (Maura West) will manage to leave Carly curious. She may put some puzzle pieces together and realize Nik must’ve visited Ava. Nina will likely solve a mystery of her own involving Charlotte Cassadine (Scarlett Fernandez). She’ll be horrified on the same day Charlotte gets hostile, so this may involve a shocker regarding Charlotte’s “secret bodyguard.”

Will Charlotte and Nina realize Nikolas has been right there in Wyndemere? Nina at least might as the evidence keeps piling up. As for Jason Morgan (Steve Burton), his suspicions will rev up and will ultimately be shared with someone. Those suspicions might involve Peter since Jason would still like to uncover his deepest, darkest secrets.