General Hospital Spoilers: Week Of December 9 Preview – Liz Prays For Christmas Miracle – Franco Wakes Up From Procedure, But As Who? 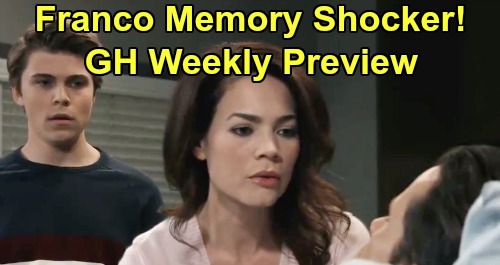 General Hospital (GH) spoilers tease that there may be a holiday miracle in store for one Port Charles family. The new GH weekly promo is all about the big memory reversal procedure that “Drew Cain,” whose memories and personality are inhabiting Franco Baldwin’s (Roger Howarth) body, is about to undergo. As GH viewers know, “Drew” has consented to the procedure, which will be conducted by Dr. Andre Maddox (Anthony Washington) and will attempt to reverse the process so that Franco’s memories and personality are restored.

The promo shows “Drew” in a hospital bed hooked up to monitors, with someone who’s presumably Andre injecting an IV line with some drug to begin the procedure. It will be a big moment for “Drew,” as he prepares to possibly cease to exist in order to give Elizabeth Baldwin (Rebecca Herbst) and her family the ultimate gift this Christmas season.

Interestingly, nowhere in the promo is the threat of Peter August (Wes Ramsey) mentioned. GH viewers will remember that Peter has been working feverishly to stop the procedure, since there’s a chance that it could end up strengthening “Drew’s” memories and that could put Peter’s whole life at risk. “Drew” could end up remembering something about Peter’s past that would totally crumble his relationship with Maxie Jones (Kirsten Storms) and his general standing in Port Charles.

At any rate, according to the promo, the procedure will happen, so it looks like Andre and Franco have remained safe and haven’t been killed by any of Peter’s henchmen. But there’s still the risk of the procedure that could put Franco’s life at risk. The good news here is that the promo shows Elizabeth and Cameron Webber (William Lipton) standing over Franco as he opens his eyes after the procedure – a sure sign that one of the procedure’s four outcomes, which is that Franco could be in a vegetative state, isn’t going to happen.

Franco clearly opens his eyes in the promo, as an anxious Elizabeth and Cameron look on. Elizabeth tentatively calls out Franco’s name, but what will happen next? Given that the vegetative state option seems to be off the table, it will either be Franco, “Drew” as he was before, or “Drew” with deepened memories.

Of course, if it’s Franco who wakes up after the procedure, then it means that Elizabeth and the boys will have their family back for the holidays, which would be a nice Christmas miracle for just about everyone…including Peter, who should be pretty relieved by the whole situation. One wonders whether Peter will finally be able to relax once Franco returns and the “Drew” threat is off the table.

And we should also mention that since the memory reversal isn’t an exact science, there’s always the possibility that Franco could wake up as Franco but still retain some of Drew’s memories. No one’s really expecting that outcome, yet it’s been stated on the show many times that the results of the memory procedure and its reversal process are unpredictable, so you never know…Peter might have something to fear even if the person who wakes up is Franco!