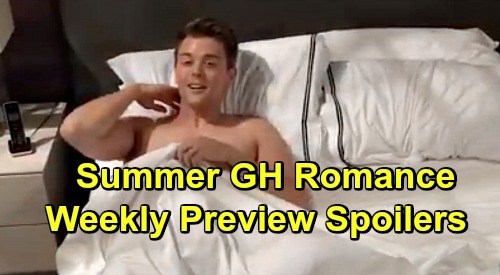 General Hospital (GH) spoilers tease that this summer will be a hot one in Port Charles, as several sizzling romances will play out. The new GH promo for the week of June 17 is all about “summer dreaming” and the various love stories that viewers can expect to see during the hot months of summer. Let’s jump right in and see what the promo offers!

First off, Anna Devane (Finola Hughes) and Hamilton Finn (Michael Easton) are shown in a passionate lip lock. These two lovebirds got engaged at the Nurses’ Ball, but since it was recently announced that Hayden Barnes (Rebecca Budig) would be returning to canvas, it seems as though Anna and Finn’s romance might be short-lived, so viewers should enjoy their time together now!

The promo also makes it clear that Sasha Gilmore (Sofia Mattsson) and Michael Corinthos’ (Chad Duell) romance will continue this summer. Of course, GH viewers are bracing for that inevitable moment when it’s revealed that Sasha is a con artist who’s in cahoots with Valentin Cassadine (James Patrick Stuart) to pass herself off as Nina Reeves’ (Cynthia Watros) daughter.

But until that day comes, it looks like GH viewers will enjoy Michael and Sasha’s steamy romance as they continue to get to know each other. Meanwhile, it looks like Willow Tait (Katelyn MacMullen) and Harrison Chase (Josh Swickard) will push forward with their relationship. They’re shown smiling and happy in the new promo, but they’ll have a lot on their plate as the summer progresses.

As GH viewers know, Willow has Shiloh Archer (Coby Ryan McLaughlin) breathing down her neck over the child she gave up for adoption. It looks like “Chillow” will need to come together to battle Shiloh, and that could either strengthen or weaken their relationship, especially if Michael continues to be a strong presence in Willow’s fight against Shiloh. We’ll see what happens on that front.

The new GH promo also shows Peter August (Wes Ramsey) and Maxie West (Kirsten Storm) locked in a kiss, as well as Laura Collins (Genie Francis) and Kevin Collins (Jon Lindstrom) sweetly smooching. Perhaps viewers will get to see Laura and Kevin get back to a normal life. It’s been a while since they’ve lived together in harmony as husband and wife without Ryan Chamberlain (Jon Lindstrom) coming between them.

The love story between Jordan Ashford (Briana Nicole Henry) and Curtis Ashford (Donnell Turner) is also explored, as the two of them gaze at each other sweetly in Jordan’s hospital room. Soon, Jordan will be leaving the hospital, which is great news, but she and Curtis will have to start dealing with the realities of life soon enough.

Specifically, they’ll be challenged with Jordan’s astronomical medical bills from her kidney transplant, but we bet that they’ll get through it together. But will their relationship be strained by what Curtis and others allegedly had to do to secure Ryan’s kidney for Jordan? Knowing Jordan, she won’t let up on the issue until she knows the truth, but what will she do then?

Franco Baldwin (Roger Howarth) and Elizabeth Baldwin (Rebecca Herbst) will soon celebrate their marriage in a big way, and they’re shown in the promo looking happy together with Franco yelling “Yeah!” Perhaps they’re planning their delayed wedding reception, which got postponed since they married while Franco was incarcerated.

And Jasper “Jax” Jacks (Ingo Rademacher) and Alexis Davis (Nancy Lee Grahn) are even shown together clinking glasses in friendship. It doesn’t look like romance is in the cards for these two, as Jax will soon be part of an intriguing (and possibly dangerous) love triangle involving Nina and Valentin, which should be some good summer viewing right there!

Are you looking forward to a summer of romance on GH? Stay tuned to the ABC soap and don’t forget to check CDL often for the latest General Hospital spoilers, updates, and news.