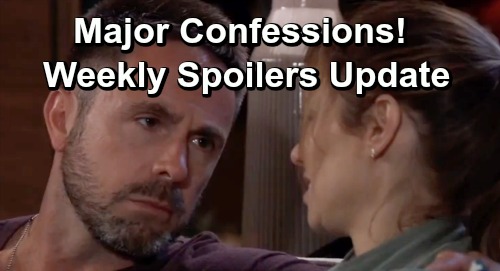 General Hospital (GH) spoilers update for the week update of June 17-21 tease that some exciting things are set to happen in Port Charles. For starters, Cynthia Watros will debut in the role of Nina Reeves. She’ll take over starting June 17, so look for Nina to pay Curtis Ashford (Donnell Turner) a visit at GH. She’ll offer to pay for Jordan Ashford’s (Briana Nicole Henry) medical expenses, which will be pretty astronomical.

Jordan will turn Nina down, so she’ll end up grumbling to Valentin Cassadine (James Patrick Stuart) later. Nina will just want to help, but Curtis will definitely put up a fight. That’s why Valentin will come up with a different idea. He’ll think there’s a way for Curtis to make money and help him out at the same time.

General Hospital spoilers say Curtis will hear Valentin’s pitch later. He’ll get on board, but this sounds like it could spell trouble for Valentin. We can’t forget that Valentin’s keeping a huge secret, which duped Curtis was part of. This Sasha Gilmore (Sofia Mattsson) has really gotten out of hand, but Valentin will do his best to keep it going.

Meanwhile, Maxie Jones (Kirsten Storms) will be excited by a new lead. She’ll be a step closer to tracking down Dante Falconeri (Dominic Zamprogna), but some snags are looming. Over with Lulu Falconeri (Emme Rylan), she’ll misinterpret a situation. Will that involve what Maxie’s up to? Could it involve another date and the story Lulu’s working on instead?

Regardless, Maxie’s mission to find Dante will press on. Elsewhere, Josslyn Jacks (Eden McCoy) will face an unsettling ordeal. She’s decided to look into having a séance and potentially communicating with Oscar Nero Quartermaine (Garren Stitt). That sounds like it could be a total disaster. Joss is in a fragile state right now, so this is the kind of thing that could really mess with her emotions.

Other General Hospital spoilers say Willow Tait (Katelyn MacMullen) will make a stunning admission. She’s been subpoenaed, so will Shiloh Archer (Coby Ryan McLaughlin) succeed in getting what he wants? Will Willow be pressured into blurting out Wiley Cooper-Jones’ name? She tends to have a hard time when the heat is on, so we’ll see how long Willow can keep this info under wraps.

Later, Sonny Corinthos (Maurice Benard) will be shocked to see Dev (Ashton Arbab) – the teen who pitched in during his Dante mission in Turkey. Michael will also visit Sonny to open up about some issues he’s dealing with. This Shiloh crisis will really take a toll on all parties involved.

That goes for Alexis Davis (Nancy Lee Grahn) as well. She’ll have a tense run-in with Shiloh while Jason Morgan (Steve Burton) considers his next drastic move. Carly Corinthos (Laura Wright) will worry about what Jason has in store. She’ll just hope her bestie can keep himself safe in the midst of all this mayhem.