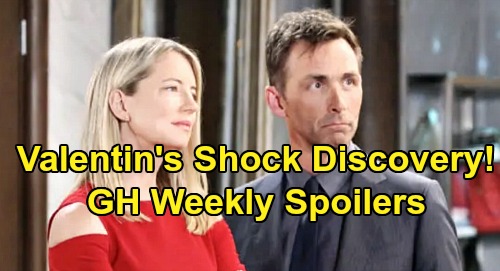 General Hospital (GH) spoilers for the week of November 25-29 tease that the drama’s about to rev up in Port Charles. Keep in mind that past and future preemptions could throw off the schedule a bit. Impeachment hearings coverage has altered some spoiler dates and will continue to do so, but here’s what you can expect as of right now.

For starters, Julian Jerome (William deVry) will do some digging and learn more about Brad Cooper’s (Parry Shen) schedule at GH. He may be looking for a specific window of time when he can target him. General Hospital spoilers say Julian will ultimately do something drastic, so this can’t be good news!

Over with Alexis Davis (Nancy Lee Grahn), she’ll ponder Neil Byrne’s (Joe Flanigan) speculation that Kendra Lennon (Michelle Argyris) is the one who poisoned her. Alexis may not buy it at first, but she’ll seem unnerved when Kendra visits later. As suspicions rise, Alexis will make a decision that’ll lead to consequences for more than just her. Many key players will be affected by what Alexis sets in motion.

GH buzz points to Kendra trying to mow Alexis down in her car. There’s been talk of Brad potentially being involved in this incident as well. Lucas Jones (Ryan Carnes) will deliver a heartfelt plea to Brad eventually, which might be after a heartbreaking crash. Will Brad end up fighting for his life along with Alexis? Time will tell, but danger is definitely coming up in PC.

However, a conversation with Nikolas Cassadine (Marcus Coloma) will lead Hayden to a terrible conclusion. She’ll realize she has to leave Port Charles – and her daughter – behind. Hayden will hate the idea of bidding Violet Barnes (Jophielle Love) farewell, but she’ll ultimately think it’s the right call under the circumstances. She’ll decide to leave Violet with Hamilton Finn (Michael Easton) and go into hiding to save her own life.

Next, “Drew Cain” Franco Baldwin (Roger Howarth) will visit Monica Quartermaine (Leslie Charleson) and let her know what he’s decided. “Drew” now understands that this life belongs to Franco, so he’ll hope Monica can understand that, too. Monica will respect “Drew’s” choice, but it’ll still be devastating for her to lose him. He serves as her last link to “Drew’s” memories, so it’ll be tough to say goodbye.

Speaking of goodbyes, Sonny Corinthos (Maurice Benard) will realize he’s also facing one of those. Mike Corbin’s (Max Gail) condition will deteriorate, so Sonny will have to come to grips with the situation. It may be a while before Sonny truly has to let go, but he’ll at least have to accept that Mike’s fading fast.

Other General Hospital spoilers say Valentin will make an intriguing discovery. Will Charlotte drop a hint about her “secret bodyguard” aka Nikolas? Finally, Laura Webber (Genie Francis) and Jasper “Jax” Jacks (Ingo Rademacher) will react to a surprise visit. There’s no word on who that might be, but Spencer Cassadine (Nicolas Cassadine) could be an option if GH has kept his return quiet. Spencer has to pop up again at some point, so it could be now.

There’s also a chance Nikolas will reveal himself to Laura ahead of Thanksgiving in Port Charles. Regardless, Laura will insist on doing what’s best for her family. If she learns Nik is alive, that could mean bringing Lulu Spencer (Emme Rylan) in the loop, too.