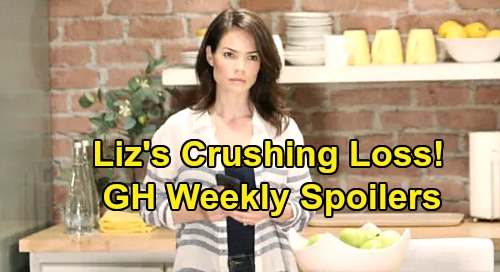 General Hospital (GH) spoilers for the week of October 21-25 tease that some Port Charles residents will drop their guards. For starters, Hayden Barnes (Rebecca Budig) will open up a bit to Elizabeth Baldwin (Rebecca Herbst). She may talk about her lingering feelings for Hamilton Finn (Michael Easton) and allude to some complications. Hayden could offer a hint about that secret daughter of hers if she’s not careful!

Of course, Finn’s already hot on Hayden’s trail. He’ll reach out to Hayden and ask her to meet, so he may plan to confront her about her miscarriage. Will Finn come right out and ask Hayden if she lied? Finn was hesitant to take that step during his chat with Alexis Davis (Nancy Lee Grahn), but he may gather his courage and do it anyway.

Then again, Finn could chip away at Hayden’s other lies – like the dog she doesn’t own and the finger-painting Aiden Webber (Jason David) didn’t do. Hayden may be forced to come up with other explanations, so Finn will be confused whether she comes clean or not. It’s clear that Hayden’s backing herself into a corner, but she may cling to her lies as long as she can.

Other General Hospital spoilers say Liz will share something meaningful. Her words will hold power once Julian Jerome (William deVry) hears them. He might decide to take the stand and talk about how fragile Kim Nero (Tamara Braun) was following Oscar Nero Quartermaine’s (Garren Stitt) death. Liz is willing to let Scott Baldwin (Kin Shriner) sink as low as he has to, so Kim’s mental state should be called into question.

Kim will definitely face some shockers as the judge hears all the arguments and prepares to make a decision. GH fans can expect a tough loss for Liz in the week ahead, which could mean Martin Gray (Michael E. Knight) will come through for Franco Baldwin (Roger Howarth). If so, Kim will be over the moon. However, happily ever after doesn’t really exist on a soap, which means Kim should brace for more trouble.

Next, Michael Corinthos (Chad Duell) will pick up on a change in Josslyn Jacks (Eden McCoy). Will it be a positive one or a negative one? Josslyn had a rough day thanks to the anniversary of Morgan Corinthos’ (Bryan Craig) passing, but she has been doing a bit better thanks to Dev Cerci (Ashton Arbab). It’s been helpful for Joss to have someone who didn’t know Oscar around. Dev doesn’t serve as a constant reminder of her grief.

Besides, Josslyn just enjoys Dev’s company. They’ve been growing closer, so Michael may sense a little pep in his sister’s step. He may be glad to know things are finally turning around for Josslyn. Over with Laura Webber (Genie Francis) and Curtis Ashford (Donnell Turner), they’ll put their thinking caps on. It’ll take some serious brainstorming if they hope to pull off this codicil mission.

Across town, Nina Reeves (Cynthia Watros) will get an extravagant present. Valentin Cassadine (James Patrick Stuart) will probably be showering his love with attention, but is he in for a rude awakening? Something’s suspicious about Nina’s belief in Valentin’s claims and instant forgiveness. She could easily have a revenge scheme underway.

Finally, Robert Scorpio (Tristan Rogers) will eavesdrop on a startling discussion. He’ll overhear something that leaves him disturbed, so this may help him with Peter’s takedown. We’ll give you updates as other GH details emerge. Stay tuned to the ABC soap and don’t forget to check CDL often for the latest General Hospital spoilers, updates and news.