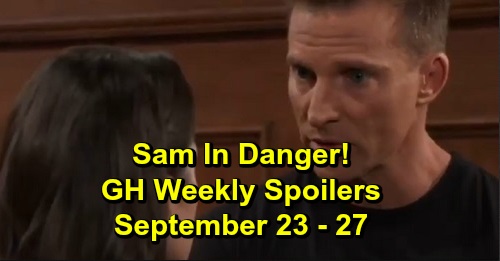 General Hospital (GH) spoilers for the week for September 23-27 tease that some suspenseful moments are in store. First, Sam McCall (Kelly Monaco) will race to The Haunted Star. There’s no word yet on what Sam will be chasing after, but it may be connected to Shiloh Archer (Coby Ryan McLaughlin). The Shiloh drama’s set to erupt, which means the “Wiley Cooper-Jones” drama will erupt, too.

Jason Morgan (Steve Burton) will be unsettled as he tries to reach Sam. He may not be successful, but he’ll wind up tracking Sam down anyway. General Hospital spoilers say Sam will find herself trapped for a while, but Jason will come through for her. He always steps up to be Sam’s hero when she needs him.

Over with Bobbie Spencer (Jacklyn Zeman), she’ll face a predicament of her own. Bobbie will get stranded somewhere, so that can’t be good news! As for Willow Tait (Katelyn MacMullen), she’ll desperately need Harrison Chase’s (Josh Swickard) comfort. That may be due to Shiloh if he swipes “Wiley,” but it may also have something to do with Brad Cooper’s (Parry Shen) looming confession.

General Hospital spoilers say Brad will offer a heartfelt apology in the week ahead. He’ll be sorry for his many misdeeds, so he may admit Willow’s baby didn’t survive. If Shiloh’s after “Wiley” and things get scary, it may force Brad to come clean. That’s not Shiloh’s son, so the truth needs to come out. Of course, the part about this kid being Jonah Corinthos may take a bit longer.

Chase will end up at the docks at some point, which could spark quite a showdown. Later, Chase will take a stretcher to GH. Will Shiloh be on it or could someone else become a victim? Regardless, some peril is looming in Port Charles.

Elsewhere, Maxie Jones (Kirsten Storms) will catch up with Damian Spinelli (Bradford Anderson). She may admit things are going well with Peter August (Wes Ramsey), but what about the suspicions surrounding Peter? Spinelli may advise Maxie to be careful with her heart. He could contend that Peter may not be the man he claims to be.

Willow and Michael will run into each other eventually, so at least they’ll avoid the docks danger. They may have a lot to discuss due to all the Shiloh developments. Next, Hayden Barnes (Rebecca Budig) and Hamilton Finn (Michael Easton) will have an encounter of their own. Will Hayden create any red flags about the secrets she’s keeping? That’s set to happen soon, so we’ll see how long it takes Finn to get a clue.

Finally, Kim Nero (Tamara Braun) will be a mess over Franco Baldwin (Roger Howarth), who was recently committed thanks to Elizabeth Baldwin (Rebecca Herbst). Liz feels Kim gave her no choice. Kim was all set to run away with Franco, but Liz is using this desperate strategy to fight for her man. She’ll stick to her guns, but Kim will be in panic mode as she fears losing “Drew Cain” all over again.