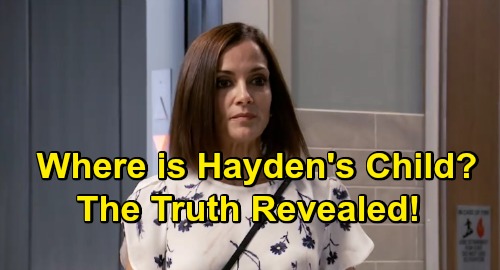 Did The Baby Die After Hayden Lied To Finn?

Did General Hospital spoilers claim that it’s possible Hayden lost the baby after lying to Finn about the miscarriage. Hayden could have predicted the miscarriage with her letter to Finn. Hayden knew it was a lie and karma could certainly have come back to bite her in the butt. It is possible that Hayden actually did lose the baby and Finn doesn’t have a child out there somewhere.

Did Hayden Give The Baby Up?

General Hospital is famous for having people give babies up for adoption, and that could certainly be the case with this baby. Hayden left town because she was blackmailed and could have given up her child to make sure that her ex-husband didn’t get his hands on the child.

Finn had also had issues with addiction and Hayden could use that as an excuse to give his child up for adoption. Would Hayden give up her and Finn’s child and let him continue to believe it is dead because she didn’t feel like she could raise the child?

Is Jax Helping Hayden To Hide The Baby?

General Hospital spoilers say that Jasper Jacks (Ingo Rademacher) and Hayden are working together because he has made her CFO of his half of Aurora Media. Since Hayden has come to town to help Jax, could he be paying for a nanny to keep her baby somewhere else?

Hayden claims to have met up with Jax in Paris, does she have an apartment there that he is making sure she holds onto to provide a home for her child? Is Jax hiding Hayden’s child in Port Charles right under Finn’s nose?

This child could be anywhere with Jax’s help, but it is unfair to Finn to keep his child from him, and Jax would not want to be kept from his daughter. Will Jax encourage Hayden to allow Finn access to his child?

Does Hayden have any intention of letting Finn know that their child survived? Will Finn ever get to see the child he has believed to be dead for over a year? When will GH writers reveal if this child is alive or dead? Come back to CDL for all your General Hospital spoilers, news and updates!