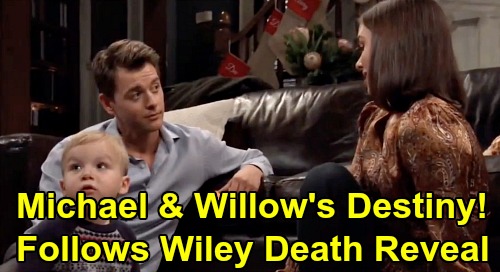 General Hospital (GH) spoilers tease that Willow Tait (Katelyn MacMullen) will face one of the most difficult blows of her life. GH viewers know Willow’s whole world has revolved around her son from the moment he was born. Every move Willow’s made has been about keeping “Wiley Cooper-Jones’” (Erik and Theo Olson) safe.

Willow gave the real Wiley up for adoption to protect him from his horrible cult-leader father, Shiloh Archer (Coby Ryan McLaughlin). She was even willing to go to jail over those sealed adoption records. It’s clear that Willow’s priority has always been “Wiley.”

General Hospital fans have also watched Willow bond with “Wiley” and battle regrets over not getting to raise him. She loves this little boy with all her heart. The problem is he’s not her little boy! Sooner or later, the truth is going to come out. Brad Cooper (Parry Shen) swapped dead Wiley for Nelle Benson’s (Chloe Lanier) child, so Willow’s been lied to right along with Michael Corinthos (Chad Duell).

That’s important because Michael and Willow are both victims in all this. They’ll be closely connected through this baby swap revelation. The pain Michael endured over losing Jonah will turn into rage over having his child stolen. Willow will struggle with anger over being deceived along with the pain of the real Wiley’s death.

Michael and Willow’s emotions may not be playing out in exactly the same way, but they’ll both have felt what each other’s feeling. It’ll serve as a way to bring Willow closer to Michael after this bomb drops. Willow will inevitably feel like Michael understands her sorrow in a way that Harrison Chase (Josh Swickard) can’t. Plus, losing Wiley could turn Willow off when it comes to ever wanting more kids.

Willow’s relationship with Chase will suddenly become complicated, but things could be much easier with Michael. None of this will be Chase’s fault, but he probably won’t be able to relate to Willow in the way she needs. Meanwhile, Michael will know exactly what Willow’s going through. He’ll likely be the person Willow chooses to lean on in the aftermath of the baby switch shocker.

Michael can assure Willow that she can still be a big part of Jonah’s life. He’s seen the bond they have and it runs deeper than blood. GH seems to be setting up a little “Millow” family here, so Chase may be left on the outside looking in. He might have to watch as Willow slowly slips away. Sasha Gilmore (Sofia Mattsson) may watch the same thing happen on Michael’s end.